How Small is the Stuff that makes up Matter?

It took a bit to figure out where my students are both academically and as scientists. Most of my students have had no hands-on experience. Starting with a big lab could be intimidating and difficult for them and for me as their teacher. I quickly turned to the idea of microscale experiments. Bob Worley has been a huge help with microscale (Please check out the LINK here. By the way, the book is worth every penny.)1

Each group requires just a few drops of each of the following: 0.1 M KI, liquid starch mixed with a small amount of water (about an 80 / 20 mixture), liquid bleach

The instructor will provide one drop of 1 M HCl per group.

2 small spatula scoops for each group

First, I wanted students to consider a couple of questions. We were going to do a series of experiments and I wanted them to focus on two essential questions.

Our first activity started with a short presentation seen below. The goal of the activity was to try to determine something about the size of a particle based on placing a teaspoon of oil on a lake. This activity was developed through Project TIMU. The presentation includes a video of me pouring a teaspoon of olive oil on a lake. The teaspoon of volume is converted into milliliters. The milliliters are converted into cubic centimeters. If students estimate the diameter of the oil slick, they can calculate, with the volume in cubic centimeters, the approximate thickness of the spill. This provides an idea of the upper size limit of the particles that make up the oil. Through a simple experiment of oil and water students start to learn that the particles that make up the oil must be moving and are small (to be fair, I stole this idea from Phillip Morrison, a brilliant scientist and teacher).2

Next, students did some “Puddle Chemistry”. Bob has some excellent examples in his book “Understanding Chemistry through microscale practical work”. I have written about this before (see the link here). Students placed a “puddle” of water on some paper. They carefully placed a few crystals of sodium carbonate on one side of the puddle and some copper (II) sulfate on the other and pushed them in at the same time. A line of precipitate formed “magically” in the middle. Again, the question was “What can we say about the size of the particles that are making this happen and what are they doing?” Students had lots of “oohs” and “aahs”. One or two groups were worried because they spilled some chemicals. Spillage would have been the end of the experiment if this were a large scale experiment. I told them to get some paper towels, wipe down the sheet and try again. No problem and their confidence level in the lab just increased a bit.

How small is the stuff that makes up matter?

The last experiment involved the evolution of chlorine gas. That is correct. I am taking a bunch of students with little lab experience and having them generate chlorine gas….extremely safely on a microscale. Again, Bob and crew has come up with a beautiful little experiment in his book (Experiment 3:2 - Generating Gases in “Understanding Chemistry through microscale work”) linked above. Here is the short version. Students are provided with a petri dish and make about six to nine little drops of potassium iodide and starch mixture. Off to the side in the same petri dish goes a drop of bleach. I came around and placed a drop of hydrochloric acid into the bleach and they covered the petri dish. The chlorine gas spread into the other drops, displaced the iodine and the iodine reacted with the starch. There was no detectable smell of chlorine gas. Apparently, it was captured by the water droplets of KI and starch as witnessed by the students. Now, this was way over the heads of the students but we could still ask the questions “What can we say about the size of the particles that are causing this change and what are they doing?” See both experiment #2 and #3 demonstrated in Video 1. 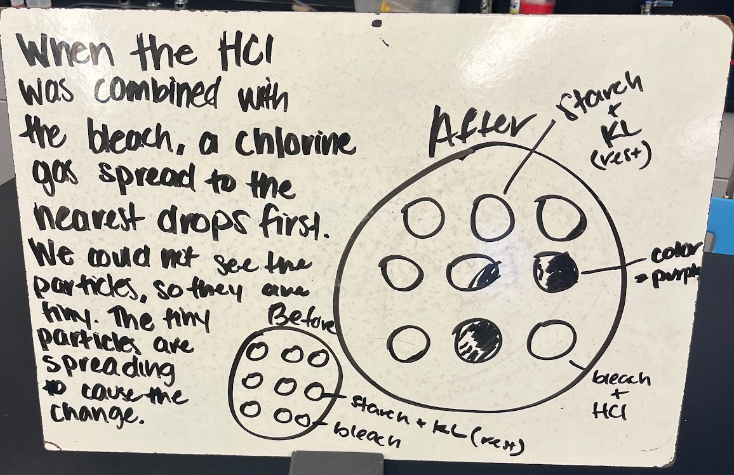 Students did not have to know anything about chemical reactions, single displacement reactions or gas diffusion. They could start to generate theories about the size of particles and what they are doing.

We finished all three activities and started to generate theories. Students in every class developed the same three ideas.

“These particles must be small. They must be moving. They are attracted to other particles.”

And with that….we have the three essential questions we are going to use for the theme of chemistry for the entire year.

Overall, I hope to develop this some more but I was extremely satisfied with how this turned out. It was engaging for the students. It was easy to set up for the instructor. It helped provide hands-on experience and confidence for the students and hopefully helped them to start thinking like scientists.

Set out materials and chemicals for each group in the class.