As stated in a previous blog, I have started doing more labs with gases thanks to Dr. Bruce Mattson and his  Microscale Gas Chemistry website. I have continued to try more of the labs found on his website and they have fit my curriculum well and worked out beautifully with my students. The last lab we completed that was developed by Dr. Mattson was about percent composition. This lab worked really well for several reasons. First, I am not used to working with gases in this manor but the teacher notes provided by Dr. Mattson are outstanding. It leaves little room for guessing or error. Students quickly mastered the method for capturing gases for reactions.  A few students made mistakes but it was quick, simple and inexpensive to try again. Students also had to revisit the idea of graphs, independent variables, dependent variables and were introduced to the idea of a calibration curve. This proved to be a great review for ACT type test questions. Finally, we usually only discuss gases during gas laws. This method provides a quick and easy way to study gases in chemical reactions. Students were able to get extremely reliable data.

It just so happened that in another class we were studying the ideal gas law. Once again, Dr. Mattson has an experiment for ideal gas laws. First I took a syringe, pulled out the plunger to a specific volume and drilled a hole in the syringe so a nail would fit through the hole. With the plunger in the syringe, I capped the syringe. I then pulled out the plunger with the help of another teacher and placed the nail in the hole. I took the mass of the syringe. I then filled the syringe with oxygen. Dr. Mattson has a simple way for creating oxygen but I had an inexpensive bottle that was purchased at a local hardware store. The syringe was filled with oxygen and massed with the nail and the cap (other gases would work as well).  This provided the mass of just the gas and took into account the buoyancy effect of air on the syringe. Next, I used an app on my phone to get the air pressure in the room. I then used a FLIR camera to get the temperature of the syringe (see figure 2). The temperature was close to room temperature. I assumed that the temperature of the syringe would be the same as the temperature of the gas in the syringe. Just to be certain, I filled the syringe with water to check the volume in a graduate cylinder. The volume of the water provided a more accurate reading for the gas. I now had the volume, temperature, pressure and mass of the oxygen gas. Using the ideal gas law I calculated the moles of gas. The molar mass was within three percent error. It took just a few minutes to do and it was a quick and easy class demonstration.

When I demonstrated this with my students, I provided them with the data I just collected and told them that the contained one of four possible gases. Students first were required to find the moles of gas. The moles of gas with the mass of the gas provided the molar mass of the gas. It was an exciting quick first time demonstration. Students were highly engaged and surprised that the gas had such a small mass.

Figure 2: FLIR image of syringe to find the temperature of the syringe

Between calibration curves, low cost, ease of use, great data and student centered methods the gas experiments by Dr. Mattson continue to impress me and my students.

*NOTE: Both of these activities can be found and downloaded from Dr. Mattson'*s book, Microscale Gas Chemistry (copyright 2000, 2017), that is freely available on his website. Details and amounts of reactants are described within those documents. The first lab described above is from Chapter 7: Percent Composition and the second activity is Chapter 9: Molar Mass. See the homepage of his website for links that explain where to buy required products, how to produce several gases and how to build the syringe devices he uses in the labs. 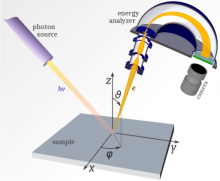