The Importance of Safety. 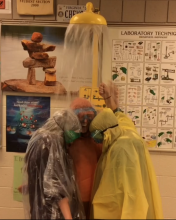 Undergraduates Need a Safety Education is the title found in the commentary section of the September 2016 Journal of Chemical Education. (The article is freely available online.) It is written by Robert H. Hill Jr and it explains the lack of safety education in chemistry curriculum. As I read this, I thought back to my safety education that prepared me for my role as a high school chemistry teacher and felt I was very fortunate to have had an undergradutae class that was specifically designed to teach chemical safety. The class was a semester long and was held on Saturdays at my undergraduate institution, Longwood University. It was not a required class at the time. When we learned we were going to blow stuff up and set things on fire as an undergradute chemistry major many of my classsmates, including myself, were very excited for this opportunity.

The class consisted of everything from fire extinguisher training where we got to set anything flammable on fire, to how to properly do demonstrations with both audience and teacher safety being equally monitored. We exploded things behind blast shields, applied different chemicals to pieces of clothing to study their effects and even dropped a few chunks of alkali metals into water to learn what was an appropriate amount to be considered safe. We even got to make some nitrogen triiodide to learn about the effects of a shock sensitive explosive. We learned about safety in the industrial setting and in the high school classroom. To say the least, I felt I was properly trained in safety for my role as a high school chemistry teacher. Now, with the introduction of YouTube videos and Mythbusters, some of the more risky demos can easily be viewed over and over again saving me money, waste, and providing a much safer environment to view many chemical demonstrations.  Examples include large methane columns being set on fire, thermite reactions, and of course those reactions with very large chunks of alkali metals.

With that being said, at the beginning of my career, I had a visit from the local fire marshal who asked to see the MSDS book and a record sheet of when I had tested the safety shower and eye wash. I passed on the MSDS book but I had never kept a log of safety shower tests. I didn't think it was my job and just figured it was the role of the custodial staff during the summer months. So ever since then, the MSDS (now SDS) book is still sitting on the counter in easy reach and there is a clipboard hooked to the shower that serves as my log of testing the shower. It holds the names of the lucky students that beg to test the shower and eye wash at the end of every year.

A few years ago, I made a safety shower challenge video. It started as a simple challenge activity related to the ALS water bucket challenge that was trending during that time. For the challenge, I decided to test the shower myself and then decided to call out several of my fellow teachers to take the challenge and test their own classroom safety showers. After the video was posted, I was asked by several of the teachers I had called out saying “You call that a shower?” or “Did you even turn it on?” You see, I didn’t have a properly working safety shower to compare my own shower to. Once I saw the video, from my fellow teachers and their showers, I was blown away by the amount of water that came out of their classroom showers compared to mine and decided mine was probably not up to code. That challenge ended up being a blessing in disguise. So after sharing the video with my schools maintenance crew they decided to investigate the problem and I am happy to say I now have a fully functioning safety shower just in case there was ever a problem in my classroom that required its use. I hope that will never happen but if it does, I know my shower will properly do what it is intended to do. Have you tested your shower recently? You can find information about how to test the shower with a google search. I found some info at the following website: https://www.grainger.com/content/qt-emergency-shower-eye-wash-stn-req-120.

Note: Kits can be bought that hook up hoses to large trash cans or shower curtains can also be purchased that will also work to contain the water.  For my students, a kiddie pool and some ponchos have worked out nicely for them to stand in for testing purposes.