Two important types of information obtained from ice cores comes from the bubbles in the glacial ice and the oxygen and hydrogen isotopes within the frozen water molecules themselves. The bubbles are formed as snow becomes compressed and the air between the flakes gets trapped. These air pocket 'fossils' provide samples of what the atmosphere was like when that layer of ice formed. As such, ice cores are the only method of accessing true samples of ancient air. And the oxygen and hydrogen isotopes within the frozen water molecules can be used as proxies to determine the relative temperature at the time when the snow fell. Thus by extracting the air from the bubbles in ice cores, changes in the past atmosphere can be studied. That is how ice core scientists can determine the concentration of gases in the ancient atmosphere, particularly in relation to past temperatures. 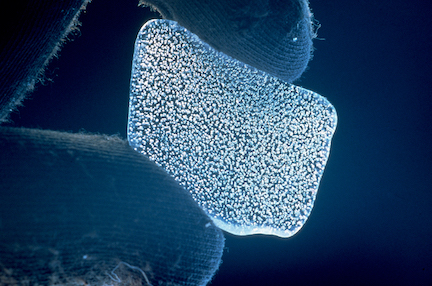 Figure 1. A sliver of Antarctic ice revealing the myriad enclosed tiny bubbles of air. Air bubbles trapped in ice hundreds or even thousands of years ago are providing vital information about past levels of greenhouse gases in the Earth's atmosphere.

In the upper most part of an ice sheet, the air in the firn (granular snow that is not yet compressed into ice) is still exchanging with the atmosphere [2, 4-5]. Once locked into the ice, the air bubbles no longer exchange with the atmosphere [2]. This process occurs during burial, and trapping is generally not complete until the bubbles are around 60 meters or more below the surface [2,4]. Once the bubbles have formed, they act as time-capsules of the atmosphere when they were trapped. By extracting the air from the bubbles in ice cores, changes in the past atmosphere can be studied. That is how ice core scientists can determine the concentration of gases in the ancient atmosphere. Studies of these changes show the dramatic increase in greenhouse gases caused by human use of fossil fuels as well as natural changes that accompany glacial/ interglacial climate shifts [1-2, 4-5].

Graphical depiction of the process for air to become trapped within an ice sheet. 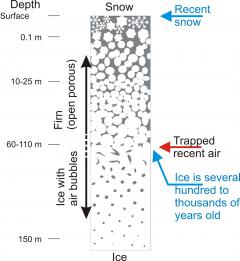 Another very important type of information obtained from ice cores comes from the frozen water itself, particularly the isotopes of oxygen and hydrogen within the water molecules. Naturally occurring hydrogen and oxygen both come in rare heavier forms called isotopes. These isotopes are one of the most significant keys to deciphering past climates. For example, oxygen comes in heavy and light isotopes, which are useful for paleoclimate research [1-2, 4-5]. Like all elements, oxygen is made up of a nucleus of protons and neutrons, surrounded by a cloud of electrons. All oxygen atoms have 8 protons, but the nucleus might contain 8, 9, or 10 neutrons. “Light” oxygen-16, with 8 protons and 8 neutrons, is the most common isotope found in nature, followed by much lesser amounts of “heavy” oxygen-18, with 8 protons and 10 neutrons.

Figure 3. Three different water molecules formed from 2 hydrogen atoms and different oxygen isotopes (similar, but with different number of neutrons in the nucleus). The most common form is H216O. For each 10,000 water molecules in nature, only 3 are H217O and 20 are H218O. Image source: http://www.iceandclimate.nbi.ku.dk/research/

In the oceans, one in about every 500 oxygen atoms is the heavy isotope, while one in about 70 hydrogen atoms is heavy (deuterium or 2H) [9]. However as the water evaporates and is transported to polar regions, the mix of the heavy isotopes changes [2,4]. These changes are mostly influenced by temperature [2,4-5] and it turns out that by measuring water isotopes in ice cores researchers can infer temperatures when the snow originally fell [4-5]. Using sensitive mass spectrometers, researchers are able to measure the ratio of the isotopes of both oxygen and hydrogen in samples taken from ice cores, and compare the result with the isotopic ratio of an average ocean water standard known as SMOW (Standard Mean Ocean Water) [4-5, 9]. The water molecules in ice cores are always depleted in the heavier isotopes and the difference compared to the standard is expressed as either 18O or D (representing Deuterium) [2,4, 9]. Both of these values tell essentially the same story- namely, that there is less 18O and D during colder than warmer periods. Why is this? Simply put, it takes more energy to evaporate the water molecules containing a heavy isotope from the surface of the ocean, and, as the moist air is transported towards the poles and cools, the water molecules containing heavier isotopes are preferentially lost in precipitation. Both of these processes, known as fractionation, are temperature dependent [2, 4-5].

Fractionation of water isotopes in the Earth's atmosphere 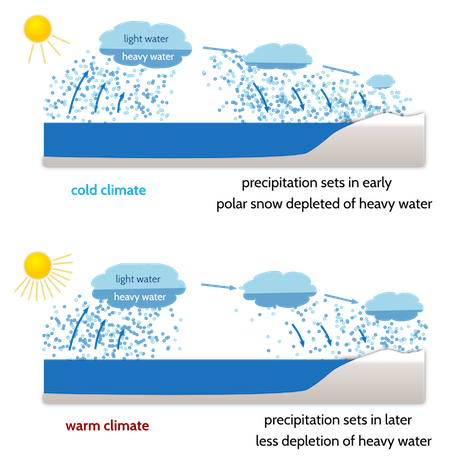 Figure 4. Water isotope fractionation in the earth's atmosphere. In a warmer climate, there is more heavy water (18O and/or Deuterium) being transported to the polar regions because there is more thermal energy available compared to the colder climate.
Image from: https://www.physics-in-a-nutshell.com/article/16/evidence-for-theearths-climate-history

At a range of sites in the polar regions scientists have measured a near linear relationship between 18O and D in samples of modern snowfall taken over several years and the mean annual temperature [1-2, 4]. This relationship can be used to calibrate the isotope ratio thermometer, although the calibration changes a little during ice age climates [5]. Plotting either 18O or D with depth along the length of an ice core reveals the seasonal oscillations in temperature and researchers can also count annual ice layers in order to date them [1-2, 4-5]. 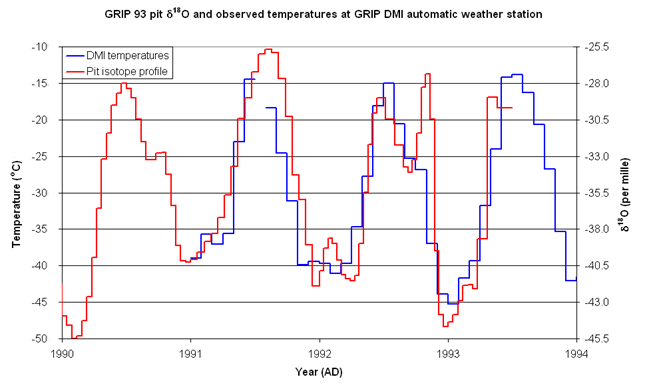 Figure 5. The annual cycle of δ18O values in Greenland snow is closely related to Greenland temperatures. Image from: http://www.iceandclimate.nbi.ku.dk/research/ Of particular interest are the concentrentations of Greenhouse gases such as CO2 and CH4 (carbon dioxide and methane, respectively) within the bubbles of ancient air. Once these measurements of CO2 and CH4 are determined, their concentrations are compared to the relative temperature via the oxygen and hydrogen isotoptic ratios over time. This very important comparison will be the topic of the next post, so stay tuned! 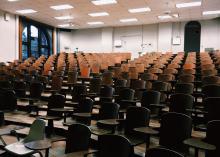 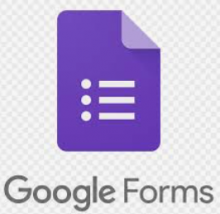