An Important Chemistry Demonstration: The Law of Conservation of Mass

The demonstration requires little in the way of preparation and has minimal cost.

But its impact is HUGE.

This demonstration is contained in the accompanying PowerPoint lesson, complete with sample data and explanations.

To pretty much all students, the Law of Conservation of Mass (LCM) is axiomatic. They have perhaps verified it empirically in a previous course with a simple double displacement reaction, such as the reaction represented by:

Sometimes this was done a teacher-demonstration in order to save time. Students observe the formation of a precipitate, with no change in mass, which proves the LCM.

Preparation of the demo would be about 30 minutes for the first time a teacher sets it up.

As for execution of the demo, I would also say at least 30 minutes. Depending on teacher-theatrics--for which I was famous--and student questions, it could go to three quarters of an hour. This would be time well spent; it exemplifies what science is all about.

A centigram electronic balance is required; a less sensitive balance will not get the job done, as you will see.

3 small vials that can hold 2.4 g NaHCO3(s) and fit within both a flask and also a 2-Liter bottle

This demonstration uses the reaction represented by equation 2:2

The demonstration will be carried out three times in succession, each using a slightly different apparatus.

In advance, place about 100 mL of 1 mol·L–1 HCl(aq) in a 250 mL flask. Now, lower a small vial containing ca 2.4 g of NaHCO3(s) into the flask—a pair of long, thin tongs may be helpful. Do not allow the sodium hydrogen carbonate to mix with the HCl(aq) yet. Record the mass of the unreacted reactants and the apparatus. Now swirl or shake the flask to allow the vial to tip over, mixing the reactants. After reaction, re-weigh the flask: you will observe a decrease in mass.

Ask the class, did this prove the LCM? The answer, of course, is “no”. Students will rightly say that carbon dioxide gas escaped.3 Now ask how the demonstration might be modified to prevent this. Someone will suggest putting a stopper on the flask and re-doing the reaction. You will respond that such a method may cause the glass flask to explode owing to increased pressure, so you won’t do that—you value your job.4 Okay, fine, say the students, just put a balloon over the mouth of the flask; that will stop the carbon dioxide gas from escaping minus the possibility of the flask exploding.

Take out, from under the lab bench, the identical apparatus with a balloon stretched over the mouth of the flask. Record the mass of the reactants, agitate the flask to initial the reaction, and watch the balloon inflate with the CO2(g) produced. When the reaction is complete, ask students to predict the final mass. Then re-weigh the flask, to reveal a decrease in mass. Assure students that no gas has escaped—the demonstration is legit.

How can this be? 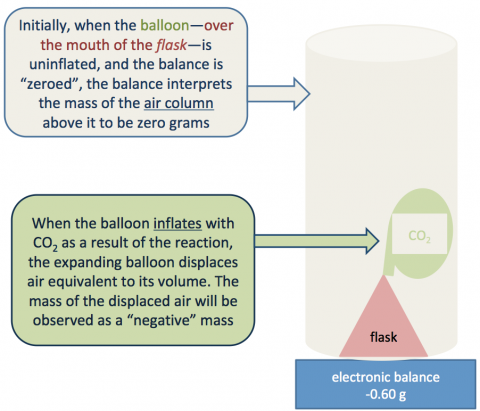 It turns out that the expanding balloon “pushes” air out of the way. And it is the mass of this displaced air—not the CO2(g) that is produced—that accounts for the observed decrease in mass. This can be explained using the concept of buoyancy, which most students5 won’t understand. But they will understand this: when a balance reads “zero”, it takes into account the mass of a column of air—which extends to the top of the atmosphere—pressing on the balance pan. The expanding balloon displaces, or pushes away, an amount of air equivalent to its volume. Assume the balloon is spherical6; measure its radius as best you can and calculate the approximate volume of the balloon—this is the volume of displaced air. Use the density of air7 to show that the mass of the air displaced by the expanding balloon is equal to the loss of mass recorded, to the precision of the measurements.8

While this demonstration explains the apparent loss of mass observed, it does not, in a straightforward manner, prove the LCM.

What to do now? A balloon over the mouth of the flask won’t give an easy proof of the LCM, and a stopper in the mouth of a glass Erlenmeyer flask would be unsafe. Through deft questioning, you will get a student to suggest carrying out the demonstration in an empty 2-L soda bottle. These bottles are made to withstand at least 7 atm of pressure9, without expanding their volume.

Now produce a sealed 2-L soda bottle containing the same reactants. The vial of NaHCO3 may be lowered into the bottle using thread. Record the initial mass and allow the reactants to mix. The mass will remain unchanged after the reaction, since the volume of the soda bottle remains unchanged and the bottle is tightly sealed. Slowly unscrewing the cap of the bottle will be accompanied by the sound of escaping carbon dioxide, which is a nice way to end the demonstration.

And so the LCM is proven, in a straightforward manner, for a reaction that produces a gas.

Why is this such a good demonstration?

Trial 1 is obvious; gas escapes and the LCM cannot be proven.

Trial 2, with a balloon over the mouth of the flask looks like an excellent idea. But it isn’t. This is a flawed experiment that could lead one to refute the LCM. A higher level of thinking, or a knowledge of the concept of buoyancy, is required to explain the apparent loss of mass after the reaction. I have seen a case where this method was used with a low-sensitivity balance10, which did not register the apparent loss of mass, indicating that use of the wrong equipment can lead to erroneous proof of the LCM.

Only in Trial 3 is the proper equipment used to prove the LCM unequivocally—and safely.

In terms of what science is all about, this demonstration is solid gold. It highlights the importance of empirical evidence: proper experiments, done properly, interpreted properly. Now, more than ever, we need to show students the process of real science.

Prepare the two flasks and the 2-L bottle as described in the procedure above. The first flask can be placed in sight. The other two should be hidden until ready to proceed with the appropriate trial.