I attended a professional development session on NGSS by Brett Moulding and Nicole Paulson based on the book they wrote with Rodger Bybee, A Vision and Plan for Science Teaching and Learning. My key takeaway from the training is that the cornerstone of the NGSS approach is student explanations of the causes of phenomena they have investigated, accompanied with arguments supported by evidence that aims to convince others why the explanation should be accepted. The purpose of the NGSS is to provide a structure for students to successfully do this. The structure that is promoted by the NGSS to help students achieve this outcome consists of the three dimensions: science and engineering practices, crosscutting concepts, and disciplinary core ideas. The scope of this post is limited to the crosscutting concepts and core ideas.

According to the presenters of the professional development I attended, the crosscutting concepts and core ideas are intended to be used as evidence to support explanations and arguments. I have been thinking that it would be helpful for my students (and for me) to have a succinct and understandable list of the core ideas that apply to Chemistry. I have found several lists of Chemistry core ideas online, but I don’t think I would give the ones I have seen to my students because they are either too long or written with language that I don’t think is suitable for novice learners of Chemistry.

I have compiled a list of the crosscutting concepts and 12 core ideas for high school Chemistry that my students could use to support the explanations and arguments I will be asking them to write. My goal is for this list to be succinctly written in language that will be accessible/understandable to high school students, yet still be acceptably thorough. My working definition of a core idea is an important idea that is broad enough to be used to help explain or support a wide variety of phenomena and that helps to facilitate making connections across topics of study. I have compiled my list of core ideas from the NGSS Disciplinary Core Ideas1, AP Chemistry Big Ideas2, the Journal of Chemical Education article, Core Ideas and Topics: Building Up or Drilling Down? by Cooper et al.3(available without a JCE subscription), Chemistry’s Core Ideas4 by Atkins that was published in Chemistry Education in New Zealand, and my own reflection. The purpose of this post is to elicit comments, feedback and suggestions from the ChemEd X community so my list can be refined and simplified as much as possible.

Because “crosscutting concepts” are core ideas that can be used to explain ANY phenomenon, regardless of the field of science the phenomenon might be associated with, they are included in this list of core ideas for Chemistry.

Help to Explain Any Phenomenon from All Fields of Science

Considered in Addition to the Crosscutting Concepts

My hope is that together these concepts and ideas can be used to help write explanations and arguments for all phenomena a high school Chemistry student will encounter.

What do you think? Is this list of concepts and ideas potentially helpful in the NGSS-driven quest to describe phenomena? Does this short list accurately distill the vast topic of Chemistry? Do you see a way to further simplify any part of this? Are there any modifications you would make? Any errors to fix? Please leave your comments below. 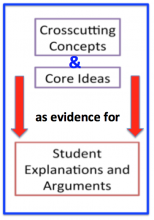