The landing of the Perseverance rover and the flights of the Ingenuity helicopter on Mars1,2 have again turned people’s attention to that red planet and to space exploration in general. There are many opportunities to compare the chemistry of our planet with other worlds, both in a formal teaching setting and in less formal science outreach events. One area in which planets can be compared and contrasted are the composition and properties of their atmospheres.

Many resources graphically illustrate atmospheric composition as some sort of two-dimensional chart that can be projected on screens and shown to audiences.3 The Bradley University Chemistry Club Demo Crew uses stacks of LEGO bricks to describe atmospheric composition in science outreach events. LEGO bricks have been used to illustrate a number of chemical principles, ranging from chemical structures to the instruments used to study those chemical structures.4,5 LEGO bricks are items that many people find familiar and they come in a variety of colors. In the brick stacks, the various colors of the bricks can be used to represent the various gases in planetary atmospheres.

Figures 1 and 2 show atmosphere sticks that have been developed for the planets Venus, Earth, Mars, Jupiter, and Neptune. The fundamental brick type used to build many of these sticks has 8 connector pegs in a 2 peg by 4 peg rectangular arrangement (designated a brick 2x4). This brick is very common to many LEGO brick sets. The larger atmosphere sticks are essentially 100 bricks long, so that each brick 2x4 represents one percent of a planetary atmosphere composition. A 100 brick stack is 96 cm in length, which is sufficiently large to show in a classroom setting, yet sufficiently small to bundle with other sticks for storage and portability. To help keep the bricks stacked together in each stick, cyanoacrylate-based adhesives can be used (the bricks are comprised of acrylonitrile-butadiene-styrene polymer). Alternatively, a strip or two of transparent, colorless packing tape can be placed lengthwise along the stick to provide support. 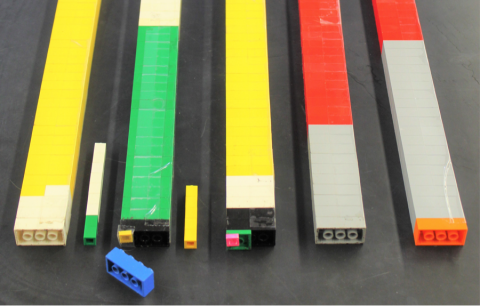 A number of the models have additional small bricks, representing selected gases that are present in the atmosphere in concentrations of less than 1%. The Earth atmosphere stick in Figure 1 also includes an optional blue 2x4 brick to represent a small amount of water vapor. The colors are consistent between the sticks, e.g. yellow represents carbon dioxide in all models. To build the models shown in the figures, the following bricks and colors were used. Planetary atmosphere composition and pressure do vary somewhat from source to source. The data here was obtained from NASA Goddard fact sheets.7-11

A video using 100 LEGO brick sticks for the atmospheres of Earth, Venus, Mars, and Jupiter is available below. Video 1 was shot next to model of the Earth in Peoria, Illinois, where one of the largest scale models of the Solar System in the world is centered.12

Video 1: The atmosphere of Earth and other planets - Description of the atmospheres of Earth, Venus, Mars, and Jupiter using 100 LEGO brick sticks, shot next to an outdoor model of the Earth. ChemDemos YouTube Channel, August 30, 2020.

A variety of features of these models can be emphasized, depending on the point that the demonstrator is trying to make. For example, a brief glance at the sticks for the atmospheres of Venus, Earth, and Mars shows that Earth’s atmosphere is very different from its nearest neighbor planets. Earth’s atmosphere has much less carbon dioxide and much more oxygen gas than Venus or Mars. It can be shown in outreach events that this is in part related to plant life consuming carbon dioxide and producing oxygen gas. Earth is a special place for human life because of that plant life. The atmospheres of Venus, Earth, and Mars are also very different from the giant planets. Jupiter, Saturn, Uranus, and Neptune all have atmospheres comprised predominantly of hydrogen and helium; Uranus and Neptune also contain a little bit of methane.

The small atmosphere sticks, in concert with the 100 brick sticks, provide opportunities to discuss atmospheric pressures and challenges associated with exploring other planets. Probes to the surface of Venus must be able to withstand over 90 atm of pressure. That issue can be illustrated by using a sort of inverted cup of aluminum foil to support the small Earth atmosphere stick, whereas the 100 brick Venus atmosphere stick pushes in. Video 2 showing this demonstration is shot next to a model of Venus in Peoria, Illinois.12

Video 2: Description of the composition and pressure of the atmosphere of Venus in comparison to Earth, using LEGO brick sticks and aluminum foil, shot next to an outdoor model of Venus. ChemDemos YouTube Channel, April 25, 2021.

The Ingenuity helicopter on Mars needed to be designed so its whirling blades could provide lift in its thin, low-pressure mostly carbon dioxide atmosphere.1 This could be demonstrated by placing a small battery-powered fan in a vacuum desiccator and showing that in a vacuum there is insufficient air to blow around ribbons. See Video 3 of this demonstration, accompanied by the 100 brick Earth atmosphere stick and the small Mars atmosphere stick.

Video 3: A fan is placed in a vacuum desiccator and most of the air is removed, which prevents the fan from moving ribbons. This illustrates that it is challenging to fly a helicopter in the low atmospheric pressure of Mars. ChemDemos YouTube Channel, April 28, 2021.

Mars has carbon dioxide in solid form as well as in the gaseous state. Video 4 features atmosphere sticks for Earth and Mars and a carbon dioxide gas sensor at a pile of solid carbon dioxide outside of a dry ice facility.

Video 4:  Visit to a pile of solid carbon dioxide at a dry ice facility near an ethanol plant. Deposits of dry ice have been found on Mars, where carbon dioxide makes up the majority of the atmosphere, ChemDemos YouTube Channel, May 8, 2021.

Finally, another recent experiment associated with the Perseverance Rover Mission to Mars is the Mars Oxygen In-Situ Resource Utilization Experiment (MOXIE), in which carbon dioxide from the atmosphere of Mars was electrochemically converted to oxygen gas and carbon monoxide. It is notable that Mars already contains 0.06 % CO,2 which can be shown with the 100 brick atmosphere stick.

LEGO bricks are not the only way to illustrate planetary atmosphere composition and pressure. Presumably, wooden sticks of similar size could be painted various color stripes at various places along their lengths to represent different gas concentrations. For those who might be unable to see the colors of the sticks, this author wonders of the surfaces of the atmosphere sticks could covered with differing textures (e.g., smooth, sandpaper, felt, fuzzy, ridged) for a tactile experience. However, as noted above, the colorful LEGO bricks that many people find familiar have been used as visual aids at a number of outreach events.

Acknowledgements This work was supported by Bradley University and the Mund-Lagowski Department of Chemistry and Biochemistry with additional support from the Illinois Heartland Section of the American Chemical Society and the Illinois Space Grant Consortium.