In recent years, the fluorescence properties of pumpkin seeds have been highlighted on social media. When illuminated with a UV lamp, pumpkin seed extract appears orange/red to the human eye (see figure 1), this is due to fluorescence associated with protochlorophyllide that is present in the seeds.1 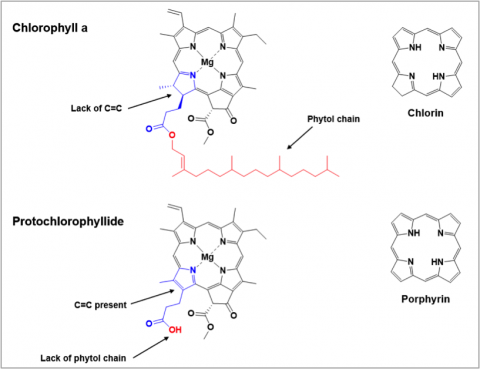 Figure 2: Structures of chlorophyll a and protochlorophyllide

Scheme 1: Chemiluminescence from reaction of aryl oxalate esters with hydrogen peroxide in the presence of a fluorescent dye.

In each case, about 12-15 seeds were crushed using a mortar and pestle, ethyl acetate (10 mL) was added and the crushed seeds were allowed to soak for 10 minutes. The resulting extracts were pale green in colour and gave the expected orange emission when illuminated under UV light (see figure 4). The seed extracts were initially cloudy in appearance, so before further use, they required filtration (either through fluted filter paper or through a funnel with a cotton wool plug placed in the stem). The fresh seeds were found to be slightly easier to work with since the extract was less cloudy than the extract obtained from dried seeds.

Video 1: Light emission from chlorophyll in the presence of glowstick mix (chlorophyll extracted from Parsley) In this study, the extract from fresh pumpkin seeds was added to aryl oxalate ester mixtures containing 30% hydrogen peroxide or sodium percarbonate (see procedures section), in both cases red/pink or red/orange emission was observed (see figure 6). See video 2 of protochlorophyllide chemiluminescence below.

Video 2: Light emission from pumpkin seed extract in the presence of glowstick mix.

The disappointing results with the extract from dried pumpkin seeds in chemiluminescence tests led to an investigation of the composition of the extracts from fresh and dried seeds. UV-visible spectroscopy is frequently used to analyse the chlorophylls in leaf extracts,8,9 a similar approach was used for analysis of pumpkin seed extracts in this study. The spectra obtained showed that the fresh and dried extracts had different compositions (see figure 7). The extract from the fresh seeds showed a strong absorption (437 nm) in the blue region of the spectrum, in contrast, the extract from the dried seeds showed two strong absorptions (422 nm and 437 nm) in the blue region. The shift of absorption to shorter wavelength in the sample from dried seeds is reminiscent of the effect seen in loss of Mg2+ from chlorophyll a to form pheophytin a at low pH (scheme 2).2,9 It is unclear at this stage what the composition differences between fresh and dried seeds are, however, investigations are ongoing.

Scheme 2: Conversion of chlorophyll a to pheophytin a under acidic conditions

Each procedure takes about 5-10 minutes to prepare and complete. Initial emission of fairly bright light usually lasts for 15-20 seconds, frequently longer, although dim light can sometimes still be observed after 60-90 seconds.

Pumpkin seeds are readily available, in this case from a discarded Halloween pumpkin, and can be stored for several months.

1 × 100 mL beaker or Conical flask (If using sodium percarbonate rather than hydrogen peroxide, it is best to use a conical flask that can be sealed with a rubber stopper). This will allow any carbon dioxide pressure build-up to be easily released).

To a 100 mL conical flask, add the desired aryl oxalate ester (approximately 100 mg) and dissolve as much of this as possible in 40-50 mL of ethyl acetate. Transfer sodium salicylate (approximately 75 mg) to the reaction flask and mix the solution occasionally for a few minutes (some solid material may still be visible, this is not a problem). To initiate chemiluminescence, add 2-3 mL of pumpkin seed extract, followed by dropwise addition of 30% hydrogen peroxide until light is observed (3 or 4 drops of peroxide is usually sufficient).

To a 100 mL conical flask, add the desired aryl oxalate ester (approximately 100 mg) and dissolve as much of this as possible in 40-50 mL of ethyl acetate. Transfer sodium percarbonate (ca. 150 mg) to the reaction flask and mix the solution (the percarbonate is not particularly soluble in ethyl acetate). To initiate chemiluminescence, add 2-3 mL of pumpkin seed extract, followed by 1-2 mL of water to the mixture, and vigorously shake or mix the flask contents (Caution! vent CO2 pressure build-up regularly if you decide to stopper the flask and shake).

After a demonstration has been completed, the flask contents are poured into water (100 mL) and treated with sodium metabisulfite or sodium sulfite to destroy any residual hydrogen peroxide. The biphasic mixture is transferred to a separating funnel and the 2 layers separated. The ethyl acetate fraction should be disposed of as organic solvent waste and the aqueous fraction can be treated as low hazard aqueous waste.