​Atomic theory is a common topic throughout any introductory chemistry course. Regardless of the depth given to the various models and the evidence that led to their creation, it’s likely that Rutherford’s gold foil experiment gets some attention in your course. For me, this topic had always been a bit more lecture-based. Even though I thoroughly enjoyed talking about the history and development of the atom, I didn’t like the feeling of being heavily reliant upon lecture. Additionally, I didn’t like the fact that I wasn’t providing students with an opportunity to generate their own evidence to support the concepts and models that I wanted them to develop. In this post, I propose a simple activity that gives students an opportunity to replicate Rutherford’s experiment through an analogy experiment that may allow for easier conceptualization of the experiment itself and provide additional support for model development.

Before I mention anything to my students about Rutherford’s experiment, I introduce them to an analogy experiment called Projectile Pennies.  Though students don’t yet know what exactly this is an analogy to, they will shortly. It is not imperative that they understand the analogy yet anyway. The goal of the experiment is presented to them as follows:

The experimental setup (Figure 1) and the materials needed are simple. Each group receives two meter sticks, 20 pennies, a whiteboard, and an object with a circular bottom. Typically, I give the groups water bottles filled with water to ensure they have enough mass, but you could use different items with a variety of sizes.

Once the penny shooter is ready to begin firing pennies, the other group members have a few simple tasks: 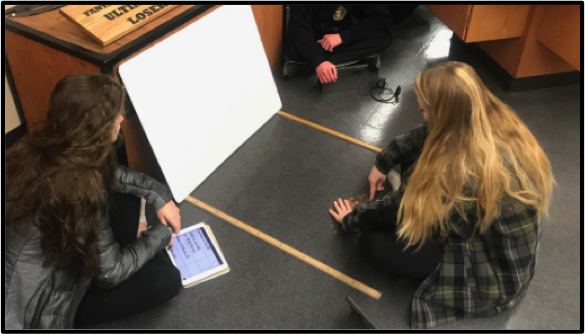 Personally, I give them the equation above simply to save time. However, I can imagine some teachers possibly adding a layer of depth to the investigation by having students derive the equation themselves. Even the equation above was the result of collaboration between teachers at a different school who were willing to suggest an improvement to the original equation I had been using (thanks to Dane Travis).

Once students have calculated the experimental diameter of the unknown object, they are asked to compare it to the known diameter. Though results will vary, several groups often get within 1 – 1.5 cm of the known diameter—pretty cool! From this experience, students gain insight as to how it is possible to determine the size of an object that cannot be seen.

Figure 3: Example data and calculation of diameter of unknown object

Once we eventually get to discussing Rutherford’s experiment, it is fun to see students make the connections between his experiment and our analogy. I will often her things like, “Oh, so the alpha particles were just like our pennies!” and other statements describing the similarities between the nucleus and unknown object. Even the realization as to why the majority of pennies did not make contact with the unknown object being similar to the majority of alpha particles going straight through the gold foil is a cool one to hear.

Gather the materials and provide the goal of the experiment and hand out to students. Log into your ChemEd X account to access the Student Handout from the Supporting Information below.