Seeds of Doubt (Annals of Science) by MIchael Specter

As the world population grows toward seven billion, it remains unclear whether food production can be increased sufficiently to feed all of those people, even at levels well below what developed countries consume now. Some believe that genetically modified organisms (GMO’s) are going to be an essential piece of the solution, but governments in the European Union have been steadfast to their opposition to production or importation of GMO products into that economic sphere, and Africa remains a battleground very much “in play”. China has approved import of some GMO’s but has recently rejected shipments of a Syngenta corn variety that had not been approved in advance. The most influential of the activists in opposition to GMO crops of all kinds is an Indian woman, Vandana Shiva, called the “Rock Star” of the battle against GMO’s.  Her claimed expertise on the environment, agriculture, and biochemistry does not derive from her formal education. While she calls herself a physicist, she has never worked or published in that field and her Ph.D. thesis (title: “Hidden variables and non-locality in quantum theory”) from the University of Western Ontario is in the philosophy of science. Although she claims variously, in different places, to be a physicist, a particle physicist, or a nuclear physicist, her physics expertise is largely a product of her own PR machine. It is also irrelevant to her

Unfortunately, the distortion and exaggeration of her academic credentials is only the beginning of her willingness to distort and exaggerate the argument against GMO’s.  Shiva’s undeniable personal magnetism and her ability to move large crowds has been taken as license to make false claims that often have been taken as truth but are constructed of whole cloth.  As an example, she has claimed that two hundred and eighty four thousand Indian farmers have committed suicide because they cannot afford to plant cotton with the Bt gene, that resists bollworm.  In fact, the suicide rate among Indian farmers has not changed since Bt cotton was introduced in India, and is comparable to that of French farmers (France continues to ban GMO’s from farming). She says that the cost of the Bt seeds has risen by eight thousand percent since 2002.  In fact, the cost of the seeds has fallen steadily.  According to the International Food Policy Research Institute Bt farmers spend fifteen percent more on seeds than before, but half as much on pesticides.  Further, yields have increased by more than one hundred and fifty percent. She does not discuss the improvement in the health of Indian cotton farmers, who suffer far less from poisoning from insecticide sprays, which have decreased sevenfold.

Michael Specter sticks largely but not entirely agricultural policy within Shiva's home country, India.  She sticks to the idea that organic farming can feed the world, and believes that her country's only acceptable path is to return to the principles and practices of an earlier era, excluding not only GMO's, but also fertilizers. Largely as a result of Vandana Shiva and other activists, Indian has approved no GMO food crops whatsoever. GMO cotton is the only such crop currently cultivated there, and Shiva campaigns relentlessly and effectively to keep it that way. Gordon Conway, former president of the Rockefeller Foundation and a professor at London's Imperial College, is also author "One Billion Hungry: Can We Feed the World?", an essential text for those who study agriculture in the developing world. He is quioted by Specter as saying "Shiva is lionized, particularly in the West, because she presents a romantic view of the farm. Truth be damned, People in the rich world love to dabble in a past they were lucky enough to avoid - you know, a couple of chickens running around with the children in the back yard.  But farming is bloody tough, as anyone whose does it knows. It is like thos epeople who romanticize villages in the developing world. Nobody who ever livedin one would do that."

Shiva’s opposition (along with that of Greenpeace) is particularly poignant with respect to “Golden rice”, a genetically modified variety that could make major inroads against Vitamin A deficiency, that afflicts more than a hundred and ninety million children under the age of five every year, and blinds as many as half a million. She claims, without data, that it “will make the malnutrition crisis worse” and that it will kill people.  She also claims, without any justification, that Bt-modified brinjal (eggplant), under development but recently rejected by the Bangladeshi government, will kill the farmers who participate in trials.

There are issues worth discussing related to the practices of big biotech firms that are responsible for GMO’s, but the discussion is impossible, and the most important issues cannot even be addressed when demagogues feel free to make up their facts. 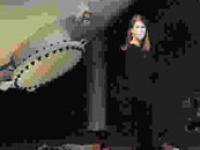 Fun with Physics: The woman leading the hunt for nature's most elusive particles