The Mole Storytelling Jam - An Interview with the Creators

BCCE 2018 was held at Notre Dame July 29 – August 2. Maria Gallardo-Williams and Holly Walter Kerby were nice enough to allow me to interview them about the inaugural Mole Storytelling Jam they created and hosted as part of the conference.

Deanna: Tell me a bit about how you came to host a storytelling event.

Holly: At any level—

Maria: The content can be difficult. Many students are afraid or just don’t want to be there.

Holly: And then, they have their own problems that have nothing to do with chemistry.

Maria: We get better at teaching the longer we do it, but we’re isolated in our own classrooms. What we learn doesn’t help other teachers facing the same problems.

Deanna: So where does story come in?

Deanna: You and Maria?

Holly: And somewhere in the conversation we got on how it would be great if teachers could share their wisdom with other teachers, so we wouldn’t all have to reinvent the wheel.

Maria: And then Holly brought up story,

Holly: And we decided story was the perfect way to communicate the stuff you’ve learned to other teachers.

Maria: We thought about organizing a symposium. Or giving workshops at the next BCCE. But that didn’t go anywhere.

Holly: And finally, we got the idea to host a storytelling jam event at the BCCE 2018 held at Notre Dame.

Deanna: How did you get chemistry teachers to tell stories?

Holly: A few volunteered, but mostly, we asked them. We looked for people we knew could tell a good story and we tried to get teachers from across of the chemical education community.

Deanna: What do you mean?

Maria: In the end we recruited 9 chemistry teachers--

Holly: A really good line up--

Maria: We asked them to tell a story about how they learned something they wished they’d have learned earlier.

Maria: And we gave out fliers at the Conference.

Deanna: So, if it was not a symposium, was it still scheduled as part of the conference?

Maria: Yes. It was scheduled as a Birds of a Feather. Tuesday night in McKenna Hall.

Holly: We decided to run it like the Moth. But since it was for chemical educators, we decided to call it—

Maria and Holly Together: The Mole!

Maria: Which amused us to no end.

Deanna: How many people attended?

Maria: About one hundred fifty.

Holly: It was packed.

Maria: Holly and I were the emcees.

Holly: And here’s the thing: every story was incredible. But the audience was the most incredible. 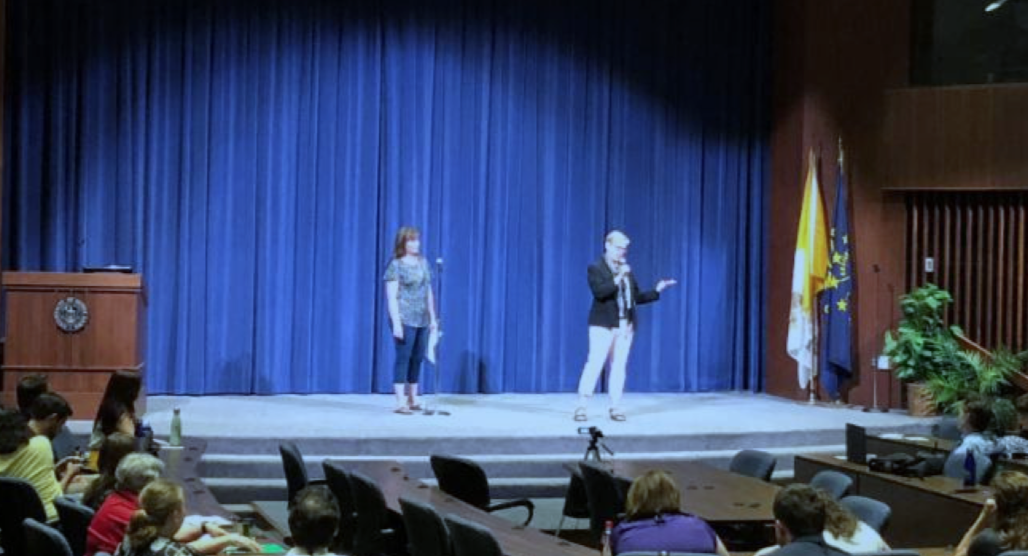 Maria and Holly welcoming the audience to The Mole Storytelling Jam

Deanna: What do you mean?

Maria: They cheered and tweeted (#TheMole)

Holly: And answered questions out loud and burst into applause and groaned in empathy. It was glorious.

Deanna: Anything else you want to tell people?

Maria: Listen to the podcasts. You can find them at soundcloud: The-Mole-Storytelling

Holly: We hope you like them. Because we love them.

Maria: Yes. And send us ideas about how to keep this going.

Deanna: Thanks for talking. And thanks for the podcasts. I loved them as well.

Maria: Thank you. It was great to talk to you.

The cast of the 2018 Mole Storytelling Jam

I Missed It, But Got a Second Chance to Hear the Stories

I have spoken with several of the chemistry instructors that spoke at The Mole Storytelling Jam as well as many members of the audience. Some phrases that were repeated over and over in regard to the event: “It was awesome!” “It was magical!” “I had such a great time!” Several people expressed that listening to other chemistry instructors share their personal stories made the listener feel more connected to the wider chemical education community because the audience could relate and see themselves in every one of them. Even though I attended BCCE and wanted to go to the event, my schedule did not allow for the time to attend. I was happy to hear that Maria and Holly were uploading the stories as podcasts to Soundcloud so that others could enjoy them. Having now listened to each of the stories, I agree with friends that said it was magical! I hope you will take the time to listen. You might groan with sympathy a few times. You will definitely nod your head yes. You will laugh out loud! You will be inspired.

You can reach out to Holly and Maria in the comments below or you can find them both on Twitter.  Maria Gallardo-Williams: @teachforaliving  &  Holly Walter Kerby: @HWKerby

I hope that I will be able to attend The Mole at other conferences in the future. I can’t wait to hear your stories!

Listen to the Podcasts

Tom Kuntzleman: The Charred Marshmallow Souffle - Tom is an Associate Professor of Chemistry at Spring Arbor University in Michigan.

Maria Gallardo-Williams: It's Not You, It's Me - Maria is an Associate Professor of Chemistry at North Carolina State University in North Carolina.

Julia Winter: How I Built a 2.5 Million Dollar Business From a High School Classroom - Julia taught chemistry at Country Day High School in Michigan for many years. She is the founder of Alchemie.

Diane Bunce: I Hate Cheating - Diane is Professor Emerita Chemistry Education at The Catholic University of America in Washington.