Editor's introduction: Please welcome Dr. Tom Cox as a new 2YC (Two-Year College) lead contributor. Tom is a chemistry faculty at Butte College in northern California. When 19, Tom found work in an Ice Core Trace Chemistry Laboratory helping measure the trace amount of chemicals in snow and ice core samples from the icy, brutally cold environs of Greenland and Antarctica. And thus began his live-long interest in stable isotopes and their use in atmospheric and climate science. Ice core science is truly cross-disciplinary as it draws extensively from chemistry, geophysics, geology, engineering, oceanography, microbiology, statistics, a deep understanding of historical events, atmospheric science, and climate science. This is Tom's first ChemEd X post and is the first of a few more to come that focuses on ice core chemistry and stable isotopes and how they help piece together the puzzle of past and future climatic events. As always...thanks for reading. Scott Donnelly, 2YC editor

When it snows, snowflakes absorb and adsorb a little bit of what is present in the air column as they descend through the atmosphere towards earth. In Greenland and Antarctica, the snow rarely melts and the snow is preserved. This is favorable to scientific analysis as a researcher can dig a snowpit 2-meters deep (and considerably deeper) and sample the snow-ice from that fell several years (or centuries) prior. By drilling and collecting a cylinder of snow and ice (known as an ice core), scientists then can analyze the snow-ice for the trace amount of chemicals present. This in turn provides a snapshot of what was taking place in the atmosphere when the snow fell. Consequently, ice core records provide the most direct and detailed way to confidently investigate past climate and atmospheric conditions.

Polar regions such as Greenland and the Antarctic- as well as some high altitude alpine areas- are sufficiently cold that snowfall accumulates year to year without a significant degree of melting. In the high alpine regions, the snow accumulates and builds up in the form of a glacier; in many parts of Greenland and Antarctica, the snow and ice accumulate in the form of ice sheets. Accumulated glacial snowfall captures atmospheric concentrations of dust, sea-salts, ash, gas bubbles and human pollutants for the specific year it fell [1-5]. As snow at the surface gets buried with time, it is compressed to form solid ice and this ice carries with it the information about the atmosphere and climate, trapping and preserving- in both space and time- invaluable information about the atmosphere, the environment, and the climate [1-5]. Thus, glaciers and ice sheets are particularly useful in that they allow researchers to go back in time and to sample what was actually in the air at the time that the snow fell [1-5]. By drilling down into a glacier or an ice sheet and recovering old ice in the form of an ice cylinder or core, the information can be extracted to help understand past climate as illustrated visually in Figure 2 below. 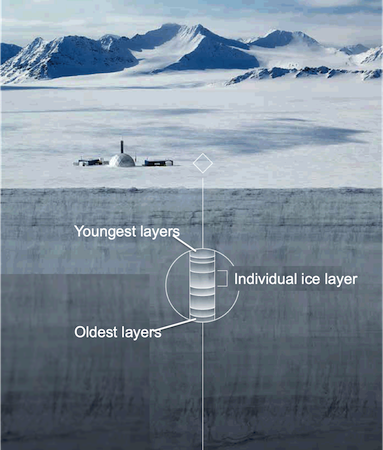 Figure 2. Snow falls year-round over the ice sheets in Greenland and Antarctica. Ice cores provide a timeline of climate, with each year represented by a new layer of snow formed on top of the ones from the year before. One way to date the layers is simply to start at the surface and count back the years. The thickness of a layer— when compared to adjacent layers—gives a sense of how much snow fell at that spot in any one year. Image Source: Adapted from Alley, R. (2000). The Two-Mile Time Machine: Ice Cores, Abrupt Climate Change, and Our Future- Updated Edition. Princeton; Oxford: Princeton University Press.

Ice core records provide the most direct and detailed way to investigate past climate and atmospheric conditions [1-5]. The information obtained from ice cores can be divided into three types. The first comes from the solid phase and the dissolved impurities in the snow. Generally, snow that falls in such remote places is almost pure water, but it still contains traces of dust, salts from the ocean, and pollutants from human activities, volcanoes and forest fires [3,4].

Many of these chemical impurities occur as ions and are in such low concentrations that their measurement is classified as trace chemistry. For example, in Greenlandic snow, Mg2+ and SO42- are in the range of 1-100 parts-per-billion (ppb), or 1-100 micrograms/liter of ice core meltwater [3-4, 6-7]. Concentrations of ions in the ppb range are commonly measured with ion chromatography. To aid students in comprehending parts-per-billion, the following examples are used:

- to find one specific person out of the approximate 7.8 billion people on the planet would be 78 ppb, and

In the far reaches of inland Antarctica and Greenland, some chemical impurities such as perchlorate ion (ClO4-) occur in the sub-parts-per-trillion (ppt) range [3-4, 6-7]. This is equivalent to less than 1 picogram/liter of ice core meltwater (pico = 10-12). Concentrations in the ppt range are typically measured via mass spectrometry. One ppt in time is one second in nearly 32,000 years. This type of information can be used to detect major environmental changes as well as variations in atmospheric chemistry and circulation. Figure 3 below gives an idea of the concentration ranges of soluble ionic solutes detected in ice core samples versus depth of ice core extracted. 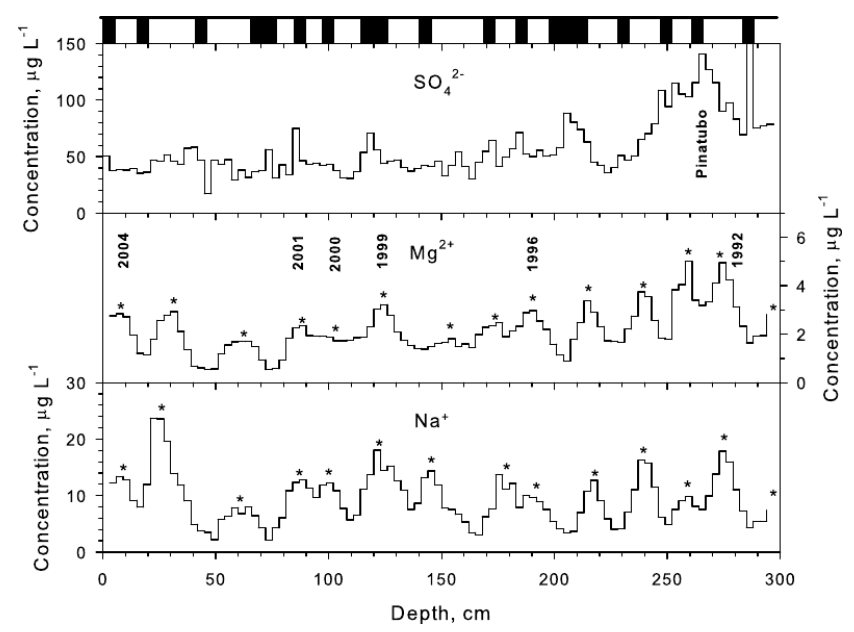 During a volcanic eruption, gases, lava (hot, melted rock at the surface), rocks, and tiny ash particles are violently ejected into the lower atmosphere- the troposphere- and with major eruptions into the atmospheric layer above the troposphere, the stratosphere. Many of the ash particles in ice cores are too small and are not visible to the naked eye [8]. Most often the particles are only one tenth (0.1) or one hundredth (0.01) of a millimeter in length [3-4,8]. Only when a large amount of ash particles is present in a layer, will the ash be visible in the ice core as a thin brown band as seen in the ice core below in Figure 4. The volcanic ash layers can be used as important reference horizons that can link different ice cores and other archives of past climate [3-4,8]. The volcanic ash also contains a chemical fingerprint which makes it possible to trace which volcano the ash originated from, and sometimes also which eruption of a particular volcano was the ash source [2-4,8]. Figure 4. A visible volcanic ash layer; most ice layers with volcanic fallout are not visible to the naked eye. Photo Credit: Author

In closing, this post is an introductory look at what chemical information ice cores contribute to better understanding earth's past climate events. The next post covers ancient air found in ice cores and stable isotopes found in the water component of the ice core.