Element of the Month- Chlorine

"In honor of the International Year of the Periodic Table this series of articles details the Element of the Month project developed by Stephen W. Wright (SWW), Associate Research Fellow at Pfizer Inc., and Marsha R. Folger (MRF), chemistry teacher (now retired) at Lyme – Old Lyme High School in Connecticut. Read The Element of the Month - An Introduction for an overview of the project and links to the other articles in the series." - High School Editor, Deanna Cullen

Chlorine is the Element of the Month for March in our program. Chlorine plays an important role in developed society. The students are generally familiar with this element to some extent but learn much from its inclusion in the Element of the Month series. The experiments described generate and use elemental chlorine gas and consequently most of the experiments must be performed in an efficient fume hood. Video projection of the fume hood is desirable if it can be arranged. 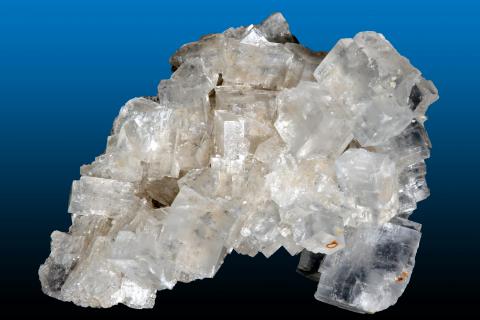 All the students will know that chlorine is obtained from common salt, vast amounts of which are dissolved in the globe’s seawater. They may be less aware that most of the salt that is actually used is not isolated directly from seawater but is actually mined from deposits of salt that remained when inland seas evaporated. The mineralogical name for such solid sodium chloride is halite, a name that is a nod to its chlorine content. It is commonly known as rock salt. We pass around a specimen of halite for the students to examine (see figure 1). Potassium chloride is similarly found in nature as the mineral sylvite.

Chlorine and its compounds are used in a dizzying array of ways in modern society. Sodium chloride is a necessary component of the human diet. However, a breathtaking amount of sodium chloride is used for deicing roads in cold climates. Sodium chloride is also the raw material from which chlorine and its compounds are derived. Chlorine compounds are most commonly encountered by students in the form of laundry bleach and disinfectants for swimming pools. Elemental chlorine is used for disinfecting municipal supplies of drinking water and the manufacture of many plastics (particularly those used in construction), many chemicals, refrigerant gases and solvents. Compounds containing chlorine are used to bleach paper pulp (chlorine dioxide) and in the manufacture of pyrotechnics and rocket propellants (chlorates and perchlorates). On the lecture table, we display various products that contain chlorine, including a box of salt, a bottle of bleach, a bottle of muriatic acid, a bottle of a toilet bowl cleaner containing hydrochloric acid, a bottle or can of a chlorinated solvent, and a sample of PVC pipe.

We note that chlorine is a green – yellow gas, and that the name chlorine is a nod to the green color of the element. Chlorine boils at -34 °C and is easily compressed and stored as a liquid much like propane. With an average molecular weight of about 71, chlorine is much denser than air. We note that its atomic weight of 35.5 is the average of two common isotopes, 35Cl and 37Cl.1

We then call the class to attention and announce that we have potentially lifesaving news that is relevant to them. We explain that the decomposition of chlorine laundry bleach with acid generates chlorine too! We write the equation for the reaction of sodium hypochlorite, NaClO, with hydrochloric acid to produce chlorine. We note that many toilet bowl cleaners contain hydrochloric acid. In the fume hood, we demonstrate the generation of chlorine gas from liquid household chlorine laundry bleach (NaClO) and 10% hydrochloric acid (a common strength in commercial toilet bowl cleaners). We use about 45 mL of each liquid to generate about 800 mL of chlorine gas in a 1000 mL Erlenmeyer flask and have the class observe the yellow-green color of the chlorine gas. Again, we emphasize that it is very dangerous to combine bleach with other household chemicals. We note that swimming pools often use electrolysis to generate dissolved chlorine on demand, a safer option than the use of hypochlorites as disinfectants.

Chlorine is a strong oxidizing agent that supports combustion. In the fume hood, we lower a burning birthday candle on a piece of wire into the flask of chlorine that we generated and note the smoky yellow flame that results.2 Chlorine reacts with many elements to form chlorides. We ask the class what the product of the reaction of iron with chlorine would be and lead them to ferric chloride (FeCl3) as the answer. In the fume hood, we generate another portion of chlorine gas from bleach and 10% hydrochloric acid using 6 mL of each liquid for each 100 mL of chlorine. In the fume hood, we show the class the reaction of steel wool with chlorine gas. We usually do this in a disposable glass jar, using just enough bleach and 10% hydrochloric acid to fill the jar with chlorine gas. The steel wool is ignited with a burner and lowered with tongs into the jar of chlorine gas in exactly the same way that steel wool was burned in oxygen gas previously.3 We ask the class what is the brown smoke?4 Was the reaction exothermic? You may wish to show them a short video of the reaction between sodium and chlorine gas forming sodium chloride (video 1).

Large volumes of chlorine, chlorine dioxide (also a yellow-green gas) and hypochlorites such as sodium hypochlorite (NaClO) are used is as bleaching agents for paper and fabric. To demonstrate this, we bleach a scrap of blue denim fabric using liquid laundry bleach.

Next, we point out the placement of chlorine in the periodic table. Chlorine is a member of the halogen family. It is less oxidizing than fluorine and more strongly oxidizing than bromine or iodine. We demonstrate the displacement of bromine and iodine from their compounds by adding a few drops of laundry bleach to solutions of sodium bromide in 1% acetic acid and potassium iodide in 1% acetic acid in large test tubes.5

Video 2: Hydrogen and Chlorine Cannon. H2 and Cl2 gases can be mixed together without reacting, but when the mixture is struck with bright light, it reacts explosively. The test tube is placed within the brass cannon for safety; should the explosion shatter the test tube, the metal would prevent flying glass. Derived from Jerrold J Jacobsen and John W. Moore. Chemistry Comes Alive! Vol. 1: Abstract of Special Issue 18, a CD ROM. Journal of Chemical Education 1997 74 (5), p 607-608. DOI: 10.1021/ed074p607

We note that chlorine combines with hydrogen to give hydrogen chloride, a colorless gas. You might like to show a video of a cannon powered by hydrogen and chlorine gases (see video 2). Hydrogen chloride gas dissolves readily in water to form hydrochloric acid, with which the class is familiar. We explain that hydrogen chloride is similar in water solubility to ammonia, and we recall the ammonia fountain experiment conducted previously. If time permits, we again perform the reaction between hydrogen chloride and ammonia. We write the equation for the reaction of ammonia with hydrochloric acid on the board, and then place a few milliliters of diluted ammonium hydroxide on some paper toweling in an evaporating dish, and a few milliliters of diluted hydrochloric acid on some paper toweling in a second evaporating dish (alternatively, the two pieces of paper toweling may be placed side by side in the same evaporating dish). A cloud of white ammonium chloride “smoke” will appear, and we explain that this is formed from the reaction between the two gases escaping from the two solutions.6

Hydrochloric acid, or muriatic acid, is a corrosive strong acid that dissolves all common metals except silver, copper, mercury and lead. For example, iron, aluminum, zinc, and chromium are all attacked. We demonstrate the reaction of 10% hydrochloric acid with some zinc metal and with some aluminum foil in large test tubes. Hydrochloric acid is a common acid used in industry and trades to clean concrete, masonry, or metal surfaces prior to painting, brazing, or soldering, and it is sold in hardware stores for this purpose. We show how it is used to clean metals by using forceps to dip a dirty, dark copper penny into 10% hydrochloric acid for a few moments and then rinsing the penny with water. Lastly, we note that all the metallic elements, except for silver and lead, form water soluble chlorides. We show the class the classic test for the presence of chloride ion, which is the formation of a precipitate upon the addition of a little dilute silver nitrate solution (see video 3).

1. The isotopes 35Cl and 37Cl isotopes of chlorine occur in a 3/1 ratio, therefore the average is a fractional number. 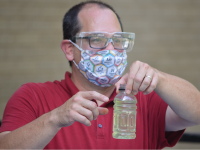 Getting to Know Dean Campbell and his Favorite Demo!