Every year, my students struggle with the concept of limiting reagents. Everything goes fine and dandy when the correct answer is the obvious choice (the reactant with the smallest starting amount), but the minute the larger starting amount corresponds to the limiting reagent, the wheels fall off, wailing and gnashing of teeth ensues, and general chemical anarchy ensues. That’s a bit of an overstatement, but I have had students get legitimately mad at me when they encounter this situation. They reject it categorically. This, my friends, is the hallmark of a challenged misconception.

One of my new favorite tools is designing lessons so that misconceptions are discovered and nullified by students before they even realize they have them. While it is possible to state a misconception and warn students of the pitfall, the problem is that while they will often believe what you tell them, they may forget. Or worse, they remember what you said…but forget the part about it being a misconception and it gets locked into their memory as true. If you really want to disrupt misconceptions, the true power is in students experiencing an activity that disrupts the misconception from the get-go.

This activity is included in Nora's Stoichiometry Interactive Notebook.

To address the challenge of limiting reagents in a way that is accessible to students, I designed an activity that introduces stoichiometry with beads. I have two versions of this lab. I first did it with beads. I used Pop Beads so that students could connect them, but this could also be done with pony beads and pipe cleaners, modeling clay, Legos, Snatoms or many other options. The second version of this lab is virtual – Google slides with drag and drop circles that students can rearrange. If possible, I think the beads version is better than the drag and drop, because the physical rearrangement and connection of the beads engages students and facilitates discussion among partners as they can both manipulate the same model. However, the virtual version conveys the same lesson with more flexibility.

Students are assigned at least 2 stations to work on, and I make sure that they attend at least 1 station that has the larger number of reactants be the limiting reagent. This activity really drives home the concept of mole ratios, and shows students the importance of starting with a balanced equation. I do this activity after students have learned how to balance equations and after an introduction to mole ratios.

Students will need about 10 minutes per station.

I used Pop Beads so that students could connect them, but this could also be done with pony beads and pipe cleaners, modeling clay, Legos, Snatoms or many other options.

I used one set of stations #1-8 as listed in the Teacher Prep Guide for a class of 28 students that are broken into groups of 4. Teachers can make two sets if they prefer to have students work in pairs.

Pipe cleaners (if using beads that do not snap together) - If you cut one pipe cleaner into four pieces, you will need 15 pipe cleaners.

If you would like to use this activity virtually, make a copy - Virtual Version of Stoichiometry with Beads Activity: Google Slide Presentation. *Note that you will need to provide students with individual links that allow for editing since they will need to move the particles. Force a Copy and then add editing rights as well.

Provide students a response sheet, either on paper or using the Google slide deck if you choose to run this virtually.

Note: Remember to tell students to reset the stations the way they found them (with the beads rearranged to form the reactants) before they rotate to the next station. 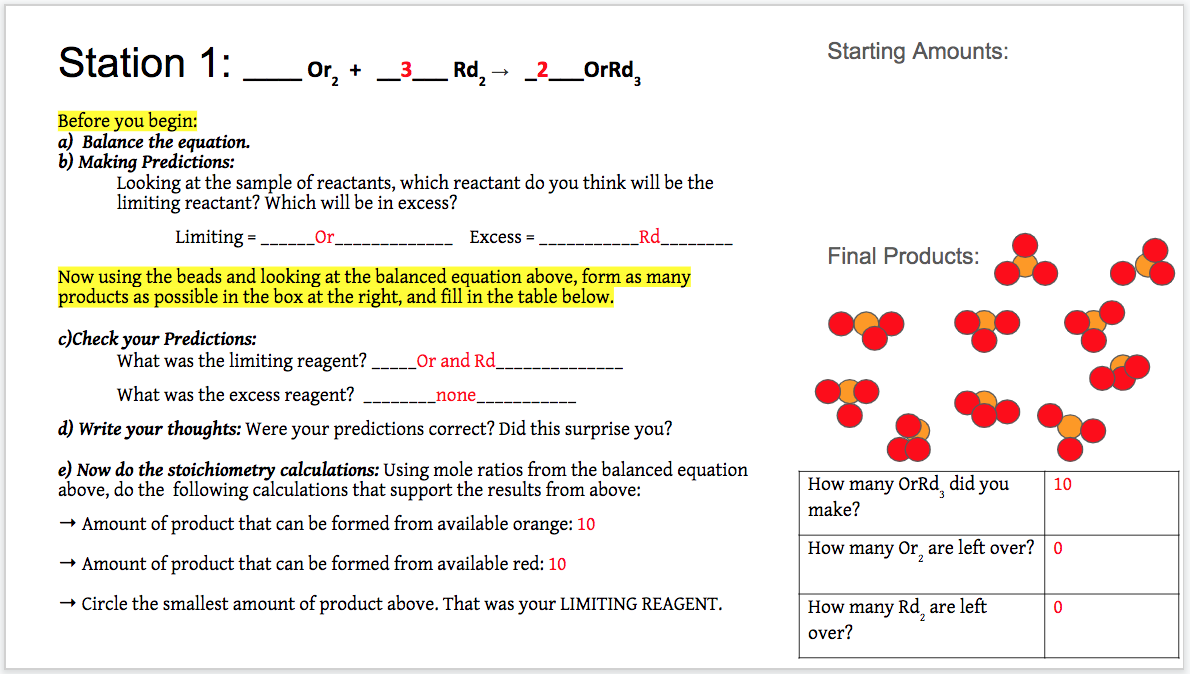 Assemble bags of starting materials for each station in baggies, as indicated on the teacher prep guide (found in the Supporting Information).* For instance, The equation for Station 1 is Or2 + Rd2 → OrRd3. Students will have 30 red beads and 10 orange beads to work with. See Figure 1 for the virtual version of Station 1.