"The Unpersuadables" by Will Storr

When addressing those who deny the conclusions of standard science, scientists tend to respond with whatever argument most succinctly shows the fringe view to be incorrect.  For example, most chemists confronted with the claim of a homeopath that a substance diluted in water by a factor of 10^30 would not bother to inquire further, just point out that there is essentially no chance that even a single molecule of the remedy could exist in the dose.  Arguments of this variety easily convince those who are already convinced that homeopathy “can’t work”, but it does not faze the sellers and buyers of homeopathic remedies, who enjoy a world market of over 5 billion dollars and a yearly growth rate claimed to be around 20%.  It is easy to find hundreds of YouTube endorsements of homeopathy, despite the protestations of (some of) those who passed Chemistry 101. A testament to the refractory nature of the beliefs is this telling exchange between Mr. Storr and a homeopath:

“If you died and went to heaven and God sat you down and told you, ‘Gemma, I have to tell you – homeopathy is nonsense.’ Would you believe him?” She answered in an instant. ‘No.”

“The Unpersuadables” begins from a relatively sympathetic view of each of the anti-science protagonists that he addresses. These include the ESP researcher Rupert Sheldrake, creationist John Mackay, past-life regressionist Vered Kilstein and the late Harvard Medical School professor John Mack, who believed in alien abduction tales. He gives plenty of rope to WW II revisionist David Irving, who accepts almost none of the standard history of the war, including Hitler’s knowledge of the Holocaust.  Storr allows Irving to attempt to explain how historians have gotten it all wrong. When they visit together a gas chamber at the Majdanek concentration camp in Poland, Irving claims that it was only an air raid shelter, and that people inside could have let themselves out using a handle on the door.  When Storr pointed out that there were large bolts on the outside attached to clasps that would have locked the doors over airtight seals, Irving preceded with a tour he was leading, as if the bolts and clasps simply did not exist.

I very much enjoyed the personal viewpoint in this skeptical book.  The author, who is not a scientist, points out that a little humility by spokespersons for the majority viewpoint may be more effective than direct confrontation.  While the majority may very often be correct, that is not always the case, and Storrs consistently tests both the convictions of his subjects and his own against reality.  Throughout “The Unpersuadables”, he tells the stories of aberrant viewpoints through direct experiences with their spokesmen. It makes this a very interesting and persuasive collection of vignettes. 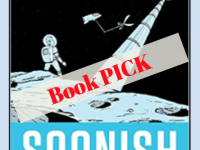