Chemistry no mystery; or, A lecturer's bequest. Being the subject-matter of a course of lectures, delivered by an old philosopher, and taken in short-hand by one of the audience, whose name is not known

I have in my library several chemistry textbooks from before 1860, but "Chemistry No Mystery" is not one of them.  Reflecting as they do an approximation of the chemistry known at the time, they provide insight about the history of both science and pedagogy. I learned about this one from my friend Ron Perkins, a skilled chemical demonstrator, and "Chemistry No Mystery" is the most demonstration-oriented of the old textbooks I have seen. It is available free from the Internet Archive, and it is great fun to read. Some of the books in my own collection are also available free online: Parke's Chemical Catechism is one of my favorites, the 5th edition of which you can read in the Google Books archive. This is the textbook from which Charles Darwin learned chemistry. In my 1818 edition, it is stated that the sun is probably inhabited! This was not Samuel Parke's original idea, but one that came from astronomer William Herschel, who thought that all of the planets were probably inhabited, including the sun. For some reason, he thought that citizens of the sun must necessarily have large heads because smaller ones would explode. Herschel also wrote more than two dozen symphonies. Herschel's theory about the inhabitable sun also appears in another book I have, The Literary and Scientific Class Book, by Levi W. Leonard. A copy of this textbook was in the library of Henry David Thoreau and it was very influential in its time. Leonard himself was quite a guy. His home in Dublin, New Hampshire was the first free public library in the United States. The most famous of the textbook authors in my collection is Justus Liebig. I have the 1847 edition of the same book that is online, Chemistry and Its Application to Agriculture and Physiology (translated by Baron Lyon Playfair) at archive.org, except that one is the 1842 edition. I think it interesting that agriculture and physiology are united by chemistry in this textbook. I have the 1846 American edition of Rudiments of Chemistry with Illustrations of the Chemical Phenomena of Daily Life, by D. B. Reid. The Edinburgh edition from the Harvard Library can be read in Google Books. My copy of that one is pretty fragile, so I admit that I haven't actually read it. My leather copy of the 1848 edition of Elements of Chemistry in Which the Recent Discoveries of the Science are Included and the Doctrines are Familiarly Explained, by J. L. Comstock is in much better shape and is readable without destruction. A slightly later book, George Fowne's A Manual of Elementary Chemistry, Theoretical and Practical of 1859 has been reported to have been widely used by physicians during the American Civil War. The Lane Library copy of the 1869 was scanned into Google Books. My copy of Johnston's Turner's A Manual of Chemistry on the Basis of Dr. Turner's Elements of Chemistry is the 4th Edition, published in 1842. The one readable through Google Books is the 6th Edition, an 1863 copy from the University of California. There is nothing like holding an old book in your hands, and in having them in your own library, but actually reading them is more practical using copies that are now available freely. 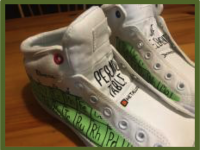