The Case of the Poisonous Socks: Tales From Chemistry

I picked up this book at the ACS National Meeting in Philadelphia in August, expecting that it would be a compilation of interesting chemistry anecdotes, organized around the chemistry involved.  That is true of the first chapter, which is about the investigation of a dye that was causing skin reactions and even ulcers in the feet and ankles of some sock-wearers in the England of 1868. It was a puzzling case because it did not affect every person who bought the new socks. While we cannot be absolutely sure about what the dye was, William Brock describes the best evidence available, which leads to the probable conclusion that it was an acidic azo dye, possibly "Field's Orange", which reacted on when the wearer's perspiration was basic. This essay is different from nearly all others in the book because they are organized around personalities rather than phenonomena. Most of the persons who are foci have been active in Britain, with the exception of a notable few, such as Amedeo Avogadro, Fritz Haber, George Olah, August Kekule, and Justus von Liebig. Brock writes in a lively and convincing manner about some of the most colorful characters in chemistry - the famous ones, of course, but also some of those often neglected. Henry Armstrong was one of those, Armstrong was an inveterate writer of letters to Chemistry and Industry, most often complaining about some newfangled idea - such as electron arrows, ion dissociation, atom bombardment, or quantum mechanics. Armstrong also famously claimed that Ramsay had mistaken an allotrope of nitrogen for his noble gas, argon. Chemists with any interest at all in history will find real nuggets throughout "Poisonous Socks".  While we were in Philadelphia, we visited the marvelous Barnes Institute art gallery there. I learned from Brock that Albert C. Barnes made his fortune from selling a bactericide named Argyrol. Barnes' enterprise later merged with Henry Crookes' company to become Crookes-Barnes Laboratories.  Barnes' wealth multiplied fabulously, allowing him to become a world-renown art collector and philanthropist. 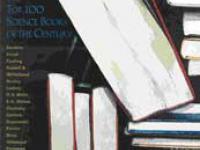 100 (or so) Books that Shaped a Century of Science