Walking The Teacher Tightrope Between Providing Professional Grace and Rigor -- Evaluation In The New World Of COVID!

“There is nothing more classy nor powerful than showing forgiveness and grace to someone.” As mentioned in my first similarly styled article, my senior students were rather severely negatively impacted by the pandemic through no fault of their own nor their teachers. There is no compulsory province-wide testing done in the province of Ontario, and, as a result, when I returned to the classroom in September, 2021, the style of evaluation for most every discipline (including chemistry) seemed like it resembled the “Wild West” in terms of varying expectations and corresponding outcomes. Each school board had their own version of how evaluations ought to be done, and, as such, were predictably varied as the day is long. I thus set about to create an evaluation system that would try to accomplish the following: to gently encourage rather than, discourage learning; to create the requisite rigor that would be needed/relied upon when my students attended post-secondary—a system that was fair both for students who were behind through no fault of their own and, simultaneously would also help to address any cheating that seemed to grow exponentially with on-line learning. The answer I came up with was to show my students the professional grace that I believed they needed during such difficult times.

Read the previous articles in this 4 part series...

Part 1: The Trials and Tribulations of a Teacher During COVID Times!

Part 2: Motivating Students While In COVID Times: Striving “Above and Beyond” For Students And Teachers Alike

With little to guide me--other than 29 years of classroom experience--the only requirement from my employer was that we were not permitted to have exams at the end of a given semester. My guiding principle when designing a system of evaluation was the sad reality that the last completely “normal” pre-COVID year for my grade 11’s was in fact their grade 8 year, and for my grade 12’s, their grade 9 year! The types of tests I gave in the grade 9 science courses obviously bore little in relation to the higher order concepts requiring mastery in the later years of high school (e.g. for my grade nines I spent more time teaching students how to study than worrying about things like the accuracy of final marks for university submission). The unfortunate reality was that many of my current students did not even know where to begin in the process; hence, instead of being angry with them at their not being where students from previous years were in terms of their knowledge and preparation, I showed them the grace I believe they deserved. 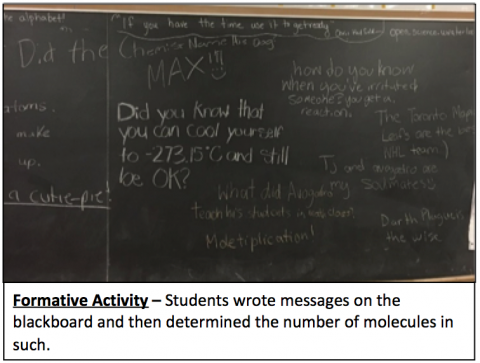 First step—providing lots of formative work! Most “teaching” (not lab) days finished with a 20-30 minute activity. For example, the “finding the number of molecules required to write a message” activity required students to write on the chalkboard and then subsequently workout the corresponding calculations. This activity could be done solo or with a group. Student responses would often be crude in terms of their level of refinement but, nonetheless, I would collect whatever they had finished at the end of each class. This allowed me to mark students work, find nuisance errors (e.g. significant figures), discuss with student groups said errors, track students’ progress, and the like. I’ve always found if I give students a little time at the end of class to work on homework, they end up frittering away their time by talking to their classmates—and I can’t righteously blame them for doing so. An activity which is to be performed within a specified time frame meant my students were actually motivated to work rather than delay/avoid their studies. As well, I offered additional formative activities in the form of traditional homework questions with full answers for students to do on their own time.

Summative work included the following four parts for each unit: Lab work, Assignment, Individual Summative, and “Above and Beyond” (see Part 2 of this series for an explanation of “Above and Beyond”). Lab work variously included "cookbook-type" labs, student-created experiments, and the analysis of dry data. The students usually work in groups of two or three. Students then collect data in their lab data-collecting books (nothing fancy here, just a properly set-up lined notebook). Pre-labs are done either in the students’ lab data-collecting books or through electronically-graded quizzes. A full lab write-up is generally not done but rather only select components are collected (e.g. observations, analysis, or discussion questions, and the like). Lab time is a busy time with a myriad activities going on but it also gives the teacher time to conference with students on an individual, ongoing basis. Such is not a formal setting so students will hopefully feel comfortable asking questions as they see fit. I also give students many chances to correct and re-submit their work. For final “Hand-In’s” (the “good copies”), I allowed my students to hand in their work a few days earlier than the due date. Early submission allows me to check over said “good” copies for predictable nuisance mistakes such as significant figures, units, and the like. Students were then able to correct and re-submit their work. I feel that early submission/return without penalty was important because, after all, such students were denied the opportunity in their junior years to refine/master their lab writing skills. Since most of my students had spent much of their formative high school years learning on-line, I observed this skill to be altogether lacking.

Assignments were the predictably traditional ones with three parts: multiple choice, short answer, and long answer. Most assignments were handed in electronically; however, I insisted that any long answers be in the students’ own handwriting. Assignments were used as a review for the individual summative for each unit. I also used such to teach students about the academic reality of deadlines. I mark quickly and return assignments to students so they can determine what they need to “re-learn,” fix, or study before they do their individual summative. Most of my students desire a post-secondary education; and, as such, need to be made to understand what it means to have a ”hard” deadline. If a student(s) misses a deadline, however, I always offer a “replacement” assignment to submit, one that balances the interests of all parties, the teacher included.

Individual Summatives were a two-part invention: a memorized component and a “cheat-sheet” component. I believe students ought to practice memorizing. Indeed, sometimes one needs to “know” something without having to look it up. The memorized component was offered over several days and usually took place during the lab time. This gave the students control over when they would write the test. At first, most students chose the last possible day but then quickly realized the strategic importance of submitting earlier than the last possible day/time. Following are examples of memorized test topics:  Writing the Names and Drawings of 13 VSEPRS; Isotopic Notation; “Map to Moleville”; and Potential Energy Diagrams. In keeping with my belief that there ought to be no surprises in terms of evaluation students were informed by me the type of question to expect. I have to say I was truly alarmed by the exceedingly poor results of my grade 12 students’ VSEPR memorized test for example. Again, in the spirit of gracious professionalism, I consulted these students and found out (to my astonishment) the vast majority of them did not know how to memorize! Next, we worked out a plan (e.g. many students identified as tactile learners and therefore needed to write out their VSEPR names and drawings.) If a student clearly demonstrated to me that is s/he had actually studied for the test (i.e. they had written out in long form all of the VSEPRS), such were welcome to do a re-write! It was not just a “get of jail free” card to re-write—my students had to show they were willing to earn the right to succeed! 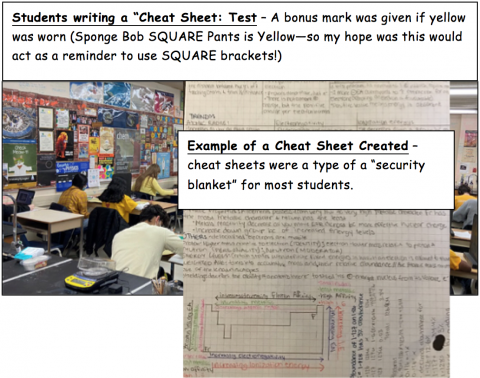 For the second part of the individual assessment, students were able to bring in a handwritten “cheat sheet.” Most students did not even need their sheet, but it gave them a “security blanket, if you will, which doubtless helped to reduce some of the associated stress. I observed most senior students had little or no ability to handle the stress of writing tests, perhaps due to their having little or no practice doing same in earlier grades. At approximately 50 minutes into the test, I allowed students to talk to their desk partner without restrictions for three minutes. For the first unit test most partners compared their multiple-choice answers; when I did this for the second unit test, such realized, strategically, that multiple choice are only one mark apiece, whereas the longer answer questions necessitated a good deal more of their collective attention. By the third test, I was pleased to observe their systematic planning out what they might ask their desk mate, some even going so far as to formulate an efficient, high value plan of attack with their partner.

Part of being a good educator is managing one’s stress. How did I avoid being overwhelmed by the apparent avalanche of marking? Pre-lab work was often marked in class and/or electronic multiple choice questions were marked automatically. “Good” copies of lab work were mostly submitted in partners on “Hand-In” sheets that I specifically designed for ease of evaluation. Never did I require an entire lab write-up.

I used the electronic platform to create assignment multiple choice questions to be marked automatically; short answer questions consisted of quick one-mark questions filled into an organizer; and longer questions were kept to a minimum depending on the unit (a maximum of ten). I made up a single “replacement” assignment for students who missed the “hard” deadline. The “replacement” was not returned to students but, instead, I conferenced said students after the fact, if they chose, to ensure they would not repeat the same mistakes before the individual summative. My reasoning for not returning “replacement” assignments was that I hoped to avoid continually making up new “replacement” assignments to thwart student cheating. Yes, this is perhaps not the best technique, pedagogically; however, most students did the original assignment, and thankfully, very few students missed more than one deadline.

Memorized tests took place over a couple days during lab work time. I made up a number of memorized tests at a time. This is generally easy because I was able to switch up numbers, reactions, molecules, etc. to vary the questions. After students started to understand how to memorize, these tests became easy to mark because they were generally very well done. “Cheat sheet” tests took a little longer to construct; however, I did not test every concept and I employed a variety of types of questions (e.g. multiple choice, short answer, and long answer.)

I have included an example of an Activity, Assignment, Memorized and “Cheat Sheet” Test in the Supporting Information below. (Log into your ChemEd X account to access. Don't have an account? Register here for free!) If you are wanting any other examples, please do not hesitate to log into your ChemEd X account and comment below as I would be only too willing to share. My sincere hope is that you too will show your students some grace when evaluating them.

Thank you to my husband, Matthew Clifford, my editor-in-chief.