In a dramatic movie trailer voice: “The Boiling Point. Gone without a trace. Or were they? The scene… a mystery. Had they disappeared? Been broken up into unrecognizable pieces? Can our hero find the answer? Or will it be too late?”

Sound like a Hollywood-style film? (Well, maybe not.) It’s the drama of chemistry, with the learner as the star. The April 2016 issue of the Journal of Chemical Education shares a new show that blends entertainment and learning.

Kerby et al. describe their theater-based demonstration show The Boiling Point in the article Demonstration Show That Promotes and Assesses Conceptual Understanding Using the Structure of Drama (full article available to JCE subscribers). Although the article title presents it as a demo show, it’s probably not what you expect. There are only three demonstrations, presented near the middle of the show. They are offered without explanation—rather, they are meant to provide information needed to answer the question, “What happens to water when it boils?” Audience members are active learners and part of the show, with a goal of answering the question based on what they observe during the experience.  The show uses “a design where engagement is driven by the audience’s desire to learn the concept, rather than the traditional strategy of piquing interest through spectacle alone.”

The show is aimed at ages 5 through 11 and requires less material than some of the group’s previous shows. It could be an opportunity for a school’s science department or chemistry club to connect with the drama department, with a view toward presenting an outreach show at an elementary school or within the community, perhaps in a library setting. The authors have made the script available online at the Fusion Science Theater (FST) website. The script can be freely used, as long as the authors and FST are acknowledged. There is also a video of a performance of the show at the site.

The Science of Measurement

The second piece that caught my eye in this issue was another performance, but this time with measurement as the main event. Amy Charles shares her review of a BBC series on DVD, in What Are the Units, and Why? Review of The Science of Measurement: Taking the Measure of the World (available to non-subscribers). Just reading the review was entertaining, but it also spurred my interest in the series itself.

It takes the viewer on a “lightning tour” of how we “define amount of what you’re looking at.” It not only brings us to the SI units we want students to know (and remember to include as labels), but also relates the difficulties associated with some of the units, and the future of measurement as researchers continue to strive for increased precision. One of the difficulties highlighted by the series is the weight loss of “Le Grand K,” the piece of metal meant to set the standard for the kilogram. The BBC website has a short clip from one of the episodes, showing a visit to the metal that’s locked up tight, including scientists getting photos of themselves posing in front of the opened vault, with the celebrity kilogram.

What are your thoughts on these two shows? What are some ways you’ve chosen to bring drama to your classroom? 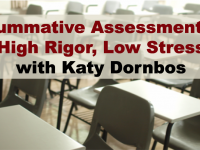