When students study atomic theory, they learn that protons and neutrons are in the nucleus and electrons are found in an electron cloud outside the nucleus. Therefore, when they are introduced to nuclear chemistry, some students have a hard time understanding that an electron can come FROM THE NUCLEUS! A beta particle is a free electron that is emitted from the nucleus of a radioactive isotope when a neutron changes to a proton by giving off a small negative charge with negligible mass.

Another misconception that students have about subatomic particles is that protons, neutrons and electrons are the smallest particles of matter. Protons, however can emit positrons just as neutrons can emit beta particles. 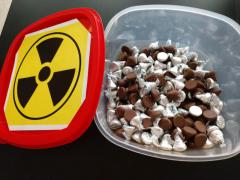 Any wrapped candy would work, such as mints or bubble gum. I used Hershey Kisses as there is a definite difference between the wrapped and unwrapped candy. 238 pieces are required to represent U-238 (92 unwrapped candies and 146 wrapped).

Gloves for students to wear when it is their turn to touch the candy in the bowl.

Safety note: Make sure students are not allergic to chocolate or other candy to be used before touching or consuming.

Give each student a wrapped piece of candy. Tell them that it is a neutral particle. (It is, since it is not shocking them). Ask them if they would rather eat the wrapper or the candy? Of course they will want to eat the candy! Positively! Explain that the wrapped candy represents a neutron and the unwrapped candy represents a proton. The wrapper is the small negatively charged particle that is emitted from a nucleus in a beta decay, a beta particle. (You could even explain that the candy is a positive energy source and the wrapper would be negative energy.)

Choose a student to simulate the first step in an alpha decay. Since the nucleus is radioactive, the student should use a glove and remove 2 protons and 2 neutrons.  The student will then pass the bowl of candy to another student to continue with the decay series. The second step is a beta decay, so the second student will use a glove to unwrap a “neutron,” return the proton to the bowl and emit the beta particle (wrapper). Students continue to pass the bowl and gloves around the room to simulate each step in the decay series.

Instruct students to count the number of alpha particles and beta particles emitted and show how Uranium-238 changes to Lead-206.

There are only 14 steps in the U-238 decay series, so you may continue the simulation by using another decay series like Thorium-232 that decays to Lead-208, which is even more interesting at the end.

At the end of the activity, if students did not get any candy, I bombarded them with neutrons and they did indeed become unstable. But that lesson is for another day!