The Extraction of Caffeine from Tea—with Several Important Outcomes

After a recent study of Intermolecular Forces, my AP Chemistry students experienced the joy of performing a microscale extraction of caffeine from tea.

Each pair of students was given about 10 mL of concentrated, basified1 tea. Using a ca 15 mL plastic centrifuge tube with a screw-on lid as a “separatory funnel”, they performed three successive two-mL extractions using dichloromethane. After each extraction, a disposable pipet was used to suction the more-dense caffeine-containing CH2Cl2. At the end of the activity, the students’ dichloromethane extractions were pooled; the solvent was distilled2 after class for re-use. 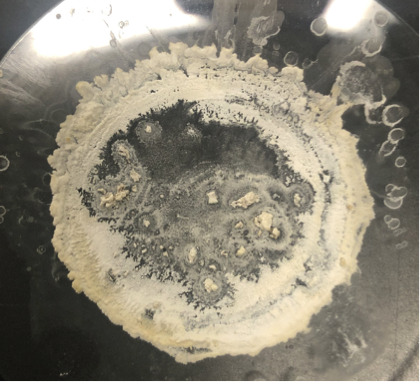 The following day students were shown their dried caffeine3.

I gotta’ say, for a bunch of near-rookies, their extracted caffeine looks pretty good—almost pure white.

A short period of self-congratulation ensued.

Then I asked for questions. After some prompting, a student asked the most important question:

“How do we know it’s caffeine?”

My answer was a rather disappointing, “We don’t”, followed by a discussion of how to purify the sample4, and the use of melting point as an identifier, along with other physical and chemical tests.

Now, more than ever, claims—of anything—must be substantiated with empirical evidence from well designed, proper experiments, properly carried out and properly interpreted.

After this oft-repeated epistle, I demonstrate a distillation. For maximum effect, I distill nail polish remover5. Students see the colored nail polish remover boiling in the ‘stil pot, and the drip, drip, drip of clear, colourless acetone (bp 56oC) or ethyl acetate (bp 77oC) into the receiving vessel.

Students have reported this observation to be “very cool”.

During the distillation, we discuss:

May peace be with you.

Per pair of students

Covalent (or molecular) compounds can be polar or non-polar, although there are various degrees of molecular polarity. Polar compounds have an overall dipole, owing to polar bonds whose dipole vectors do not cancel, or to the presence of lone pair(s) of electrons on the central atom. (Water-soluble ionic compounds are considered to be polar in the extreme—ionic, that is.) By contrast, non-polar compounds have no net dipole. This can arise because

In this experiment students will extract caffeine from tea. Caffeine is a somewhat non-polar compound with significant solubility in hot water and in dichloromethane, CH2Cl2 (aka methylene chloride).

The teacher will pool the caffeine-containing CH2Cl2 and will subsequently distill—and recover—the CH2Cl2. You will see the relatively pure caffeine next class.

Wear safety goggles and nitrile/latex gloves. Dispose of the “decaffeinated” tea in the chemical waste beaker provided. Perform the extractions in a fume hood or in a well ventilated space.

Pre and Post Lab questions are included in the student document that can be found in the Supporting Information when the reader is logged into their ChemEd X account.

After the extraction: In a separatory funnel, separate any tea from the students’ caffeine-bearing CH2Cl2. Add anhydrous MgSO4 to dry this solution before distilling the CH2Cl2 for re-use.

See the Periodic Videos crew demonstrate the Extraction of Caffeine from Coffee.