The Case of the Barking Dog

To grasp the concept of oxidation and reduction reactions, I have my high school students write half reactions to show the loss and gain of electrons by the substances being oxidized and reduced. To help with this concept, I developed a quick lab activity involving the reaction between magnesium metal and dilute hydrochloric acid, which in turn led to the students collecting the hydrogen gas and then testing for its presence. The lab was a success as I watched startled students produce the so-called barking dog sound as they combusted the hydrogen gas in their inverted test tubes.

However, When it came time to write the half reactions, particularly for the combustion of the hydrogen gas with the oxygen gas to produce water, my students were confused regarding when to write subscripts vs coefficients.

The same was true with the original reaction showing the H+ of the hydrochloric acid vs the H2 of the hydrogen gas produced.

This time the students were not copying the equation but just did not understand when to use a coefficient or a subscript.

What was happening was my students were copying down exactly what was written in the original equation without thinking about what this looked like on the particulate level. This required me to get a little creative and I had remembered Michelle Okroy’s blog about the program molview. I thought that if the students could build and see the structure of the hydrogen molecule vs the water molecule then they may gain a better understanding of why 4H+ was correct vs the 2H2+ and when to use it. I hoped that by looking at the structure of these two molecules that maybe they would see the difference between the two substances. With a class set of iPads we went to the http://molview.org/ site and began to explore.

After a quick tutorial, I had my students build hydrogen gas and then build the water molecule and compare them. The program works seamlessly on the iPads and my students loved being creative with it. 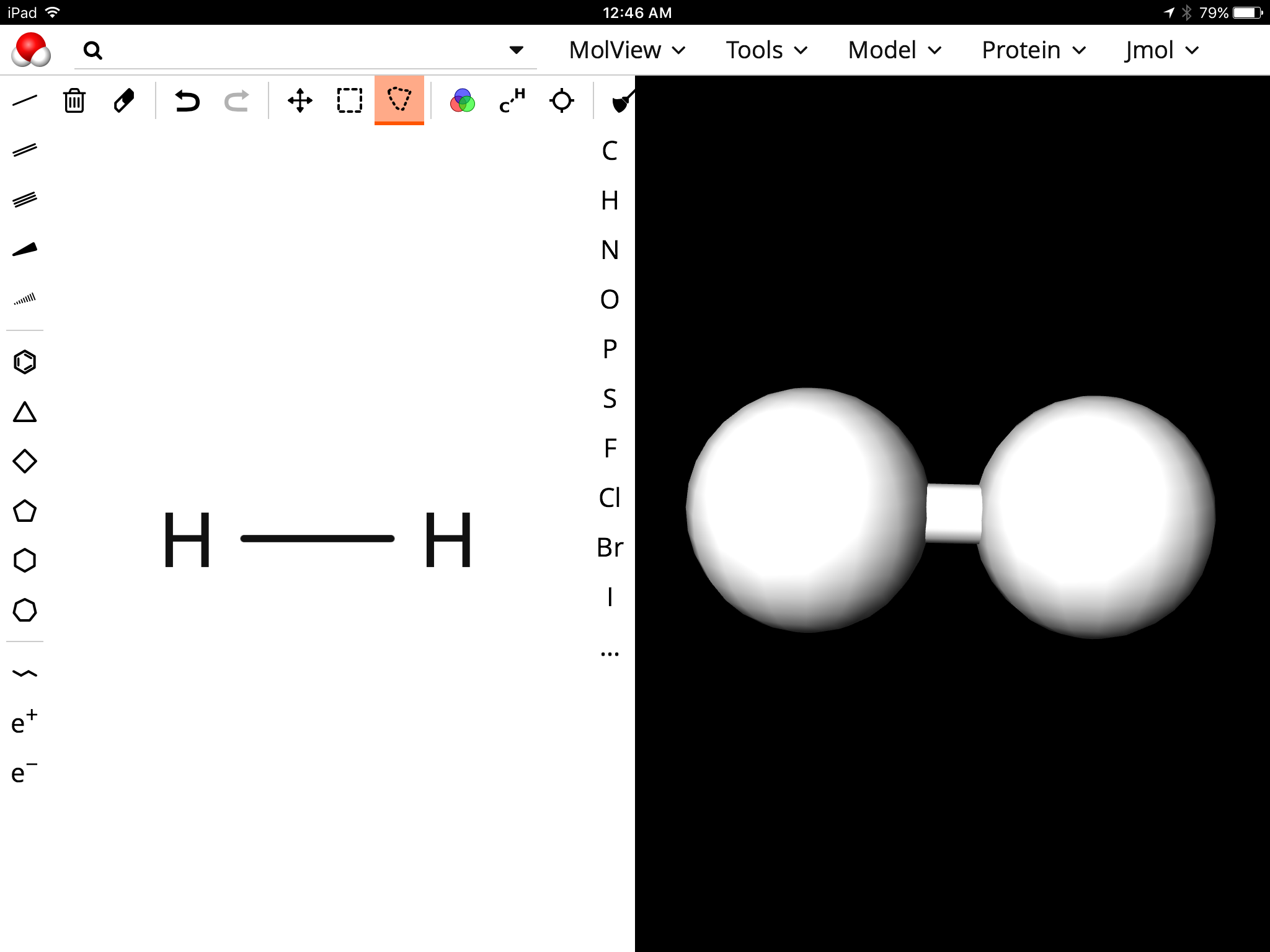 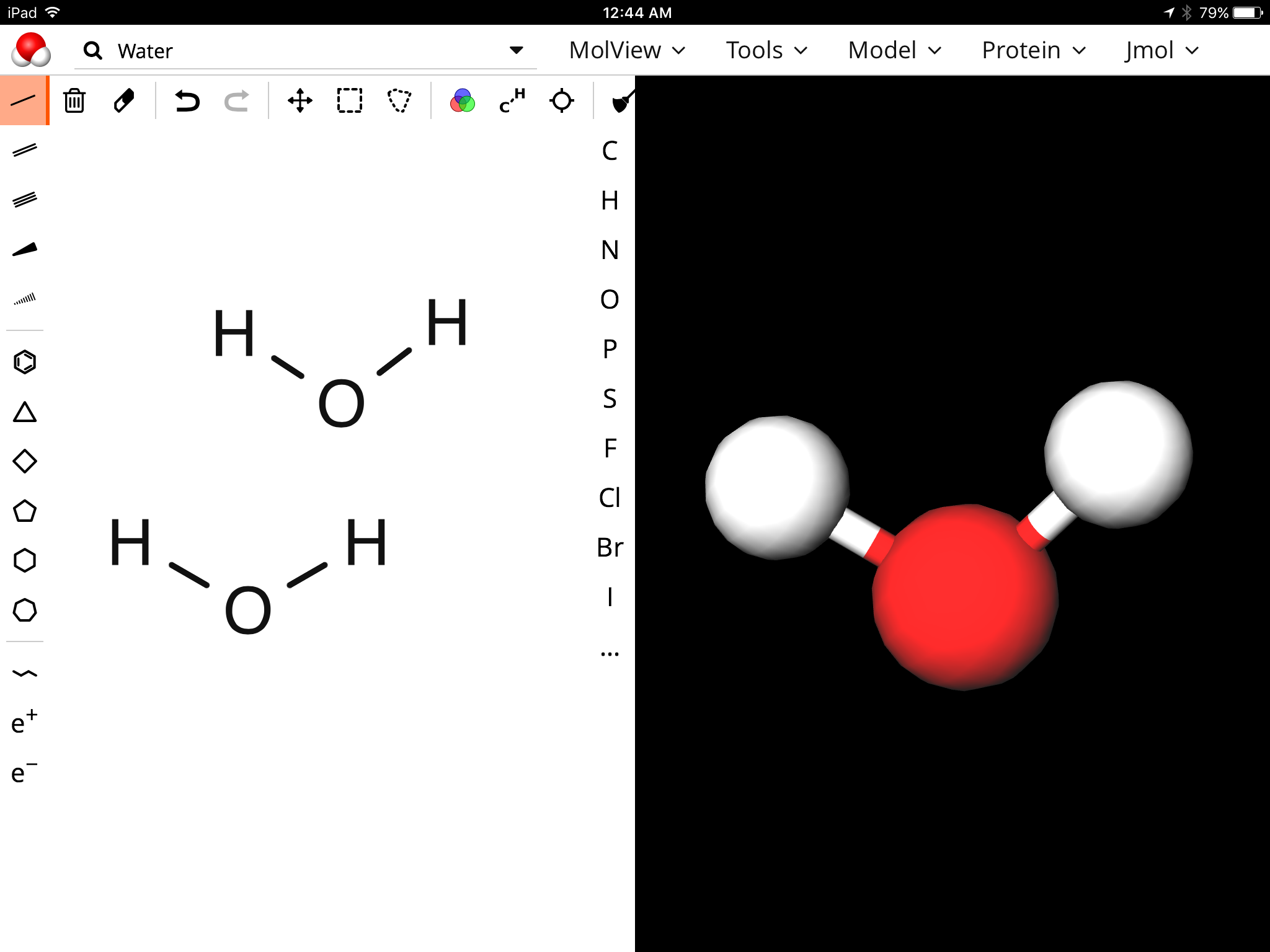 When I questioned my students regarding what was different between the two pictures they responded by saying that in the hydrogen gas picture the two hydrogen atoms were connected to one another while in the water molecule picture they were not.  My students were familiar with hydrogen existing as a diatomic molecule and once we assigned oxidation numbers they recognized hydrogen now as an ion and as H+. We still had a learning curve with MgCl2 in the original equation with some students writing Cl2 but they developed a somewhat rule of how to write them when diatomic vs as when they are shown as an ion.  Luckily, chlorine is a spectator ion in that equation but they applied their rule to the hydrogen and gained success with more practice when asked to write the half reaction on their assessment.

2. Obtain a small amount of hydrochloric acid in a small beaker

4. Obtain a small piece of magnesium metal and place it into a dry test tube and hold onto the test tube with a set of test tube clamps.

6. Once the reaction stops, quickly have your partner bring a lit wood splint near the opening of the two test tubes (perpendicular) as you slowly slightly tilt the top test tube away from the flame and listen for a reaction to occur.

7. Once the reaction is done pour out your remaining hydrochloric acid, clean up, and complete the laboratory questions.

1. Write a balanced equation showing this reaction and include the states of matter.

2. List the oxidation numbers of each element individually.  (remember any element in its pure state is assigned an oxidation of zero, even in its molecular form.)

3. What substance is being oxidized?

4. Write the half reaction for the substance being oxidized.

5. What substance is being reduced?

6. Write the half reaction for the substance being reduced.

7. Is there any substance that is a spectator ion? yes or no? If so list

11. What substance is being oxidized?

12. Write the half reaction for the substance being oxidized.

13.What substance is being reduced?

14.Write the half reaction for the substance being reduced.

15. Is there any substance that is a spectator ion? yes or no? If so list

Thanks to Michelle Okroy for the advice related to using Molview (as mentioned above).

I created the worksheet for my own students.